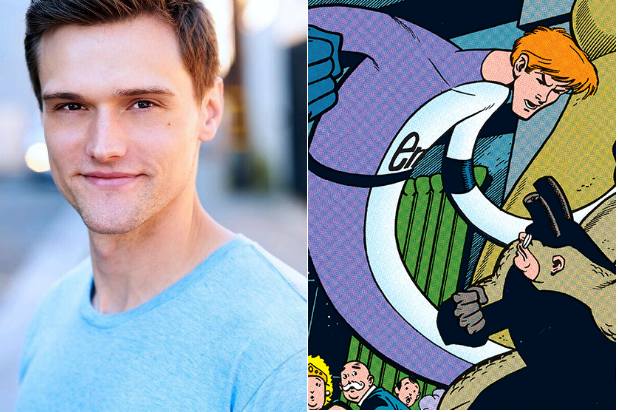 One of the Flash’s most beloved allies is coming to the CW in the fall.

The network announced Monday that Ralph Dibny aka the Elongated Man, will be joining the cast of “The Flash” in Season 4 as a recurring role.

Hartley Sawyer, who previously starred on CW Seed’s “Saving the Human Race,” has been cast as the hero who has the power to stretch his body into any shape or form.

Dibny is a fast-talking private investigator with amazing deduction skills. However, once he discovers what he can do, he uses his abilities to help Team Flash solve one of Central City’s greatest mysteries.

At the end of Season 3, Barry Allen sacrificed himself into the Speed Force, so the status of Team Flash is up in the air. A trailer released at Comic-Con shows that the group has at least been working together in some capacity since Barry’s disappearance. That even includes the reappearance of Caitlin Snow, who left the team to become Killer Frost last season.

We don’t know how Barry gets out of the Speed Force but you can assume with a show name like “The Flash” that he will.

Not many details are known about Season 4, but we do know a few basics. The main villain will be the Thinker, played by “The 100’s” Neil Sandilands, and their right hand the Mechanic, played by Kim Engelbrecht. We also know that Danny Trejo has been cast as Breacher, a bounty hunter and the father of Gypsy (Jessica Camacho), a character who was introduced last season.

With Tom Felton out as a series regular in Season 4, it’s nice to see somebody on Team Flash’s side for once. It’s also the first new metahuman that’s joined the team since Wally West — aka Kid Flash — got a hold of his powers in Season 3.

Rachel Bloom’s “Superfriends” is clearly the cream of the crop

Grant Gustin, Melissa Benoist, Jesse L. Martin etc. get to show off their musical theater backgrounds and singing chops in "The Flash's" first musical episode, "Duet," and it's a delight for fans of both shows. They managed to squeeze five musical numbers into the episode, and here's our ranking of each performance.