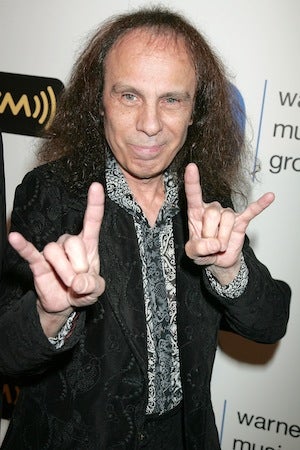 Ronnie James Dio, the caterwauling heavy metal singer who fronted Black Sabbath after Ozzy Osbourne and later found success as a solo artist, has died after a long battle with stomach cancer. His age is a matter of dispute — depending whom you ask, he was either 60 or 67.

"Today my heart is broken," according to a message from wife Wendy Dio on the singer’s website. "Ronnie passed away at 7:45am 16th May. Many, many friends and family were able to say their private good-byes before he peacefully passed away. Ronnie knew how much he was loved by all. We so appreciate the love and support that you have all given us. Please give us a few days of privacy to deal with this terrible loss. Please know he loved you all and his music will live on forever."

Dio made his battle with cancer public in 2009.

He took over as Black Sabbath frontman after Osbourne split in 1979 due to behavior problems. Dio made two albums with Black Sabbath before leaving in 1981 to start his namesake band, but later reformed with Sabbath players as Heaven & Hell.