Investors know they’re in for a roller coaster ride with Netflix stock, but they still had a lot of ups and downs over the last two days of trading.

Like roller coaster passengers, they ended up pretty much where they started. That’s despite Netflix reporting its fourth-quarter earnings, and the Dow dropping more than 500 points Wednesday.

By 2 p.m., things were looking up — much like the stock, which had reached $109.24 per share, a solid 2.4 percent from the market’s open. Unfortunately, it wouldn’t last.

Shortly thereafter, the streaming giant released its financials. Among the biggest takeaways was that Netflix hit its mark for subscriber growth — though just barely. The company reported having 74.76 million subscribers by the end of Q4, besting its guidance forecast of 74.32 million. Earnings declined, but that didn’t seem to upset the market.

“Whilst earnings declined … there had been fears the slowdown would have been significantly greater, so it’s no surprise shareholders cheered this result in after hours trading, where share prices rose,” Joshua Raymond of CFD and FX broker XTB.com told TheWrap.

“But the biggest factor that pleases here is the growth in demand for Netflix outside of the U.S.,” he added. “Net subscribers internationally grew by 66 percent year on year to more than 4 million in the quarter, beating expectations by some 500,000. This helps to counter concerns over a slowdown in the pace subscriber growth in the US, which grew below forecasts at 1.56 million.”

Netflix had dropped 11.7 percent from the highs of the prior afternoon. From open just 85 minutes earlier, it had fallen 10 percent. Even for the volatile Netflix, that’s a lot.

But you couldn’t keep Netflix down. It was up to $109.23 per share — just a penny shy of Tuesday’s high — by 3:20 p.m. on Wednesday. At 4 o’clock’s closing bell, the entertainment tech stock had settled at $107.74 — down just 15 cents from the prior close, essentially insignificant on a percentage basis.

Here’s a snapshot of Netflix’s share prices across Wednesday: 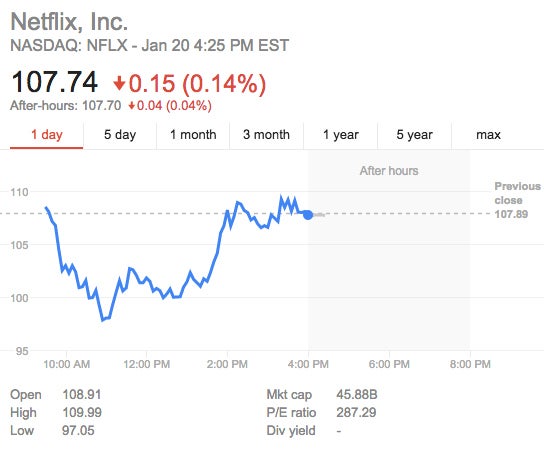 All told, open-to-close across two full trading days, Netflix didn’t even move one percent. Shareholders can take refuge in knowing that the tiny movement was a positive one, at least.

Plus, pulling it out to a full 48 hours — meaning close-to-close — NFLX is sitting at plus-3.5 percent right. Pretty good, considering all this craziness.