It sometimes seems that everyone knows Adam Goldberg’s work – but no two people know it from the same place. He’s played many strong, guest roles in TV dramas and comedies, including multi-episode arcs “Friends” and “Entourage”; made an impact in Academy Award winning films (“Saving Private Ryan,” “A Beautiful Mind”); and even starred in an offbeat Jew-sploitation movie, “The Hebrew Hammer.” Goldberg, an accomplished musician and songwriter, also stars in “(Untitled),” an art world satire opening this weekend in Los Angeles and New York. He spoke with Eric Estrin about false starts, a nervous breakdown and a very odd audition for Steven Spielberg. 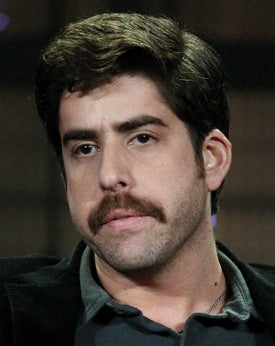 I had a couple of false starts, including a couple of vain attempts at getting representation. I was represented by an agent for about a week when I was a teenager, but he eventually dropped me because I had braces, I was told.

Shortly before I graduated from high school I was doing an equity-waiver play with a classmate of mine, and this young director saw me and asked me to come in for an independent film. I mean, I was basically cast, and so were some other people, but the producers wanted us to shoot a bunch of scenes to help them secure the financing.
I figured my life had changed, and I was a little over the moon about it. But by the end of that summer it became clear the film wasn’t gonna be made. So I just went about my business and went to college.
I went to Sarah Lawrence for a year, and I guess I had some version of a nervous breakdown. I just really couldn’t be in school anymore; I just couldn’t take it. I probably had like a genetic predisposition, coupled with being completely burned out and also being occupied with dreams of making films that tanked. Those three things in concurrence with each other were a volatile cocktail.
I basically dropped out and came back home to Los Angeles to try and go to film school at Cal Arts. In the year that intervened, I joined an acting class. And about six months or so into the class, this guy Steven Levy, who was sort of an assistant to the teacher, left to become an agent. And he said, you know, Give me a call at some point, and then when I finally did he said, Come on in.

So we met. And like within a day they sent me out on an audition for a guest star on a pilot called “Gabriel’s Fire,” which became a short-running TV series with James Earl Jones. I didn’t have a headshot or anything, so I sort of faked a resume and went in, and got called back, and I got this part.
I was playing a Southern john who has two scenes with a prostitute — sort of an unlikely bit of casting. Ultimately I was cut from the final show, which was heartbreaking, as I recall.
Anyway, I started to get little, tiny things that year. By the time I got into Cal Arts, I decided it was just too late. It was like revisiting school in a dream and you don’t know how you got there. So after 10 days, I dropped out and I just kept pursuing acting.
So then I got a run on this sitcom on Fox. And then about a year later I got the audition for “Dazed and Confused.” I did the film and quit working at this bookstore where I’d been working — though I was still completely broke. I just scraped together some little jobs until the movie came out in the hopes that it would facilitate some sort of career surge or whatever.
I’m still sort of waiting for that to kick in.
“Saving Private Ryan” definitely took things to the next place. I got sent the script and I went in. Everybody read a scene from “Midnight Clear,” the war film. It was kind of weird because my part and Vin Diesel’s role weren’t actually written yet, so I didn’t know why I was going in. I didn’t really know how to perform, what I should do, and if I should try to develop some sort of character.
I actually tried to cancel the audition, but my agent convinced me that was foolish and I should just go in.
I remember doing kind of a tough New York guy. That’s what I just sort of chose. Steven Spielberg wasn’t there; he was watching everything on tape. And, honestly, I didn’t think much about it.
About a month later I remember quite literally waking up to my manager standing over my bed, because I tend to sleep in and they couldn’t get a hold of me. He said, “Hey, you wanna go to England in July” or and I said, “Yeah, okay, why?”
And then he told me what it was — that I got picked for “Private Ryan,” and I got very excited, but then I realized … what am I playing? For all I knew, I was playing somebody who had two little scenes in the movie.
And then after a while they had a script for me to read, and they brought me into the office to read secretly. That’s the first time I saw this role of Melish, and I finally knew this was a great part.
x
Looks like you're enjoying reading