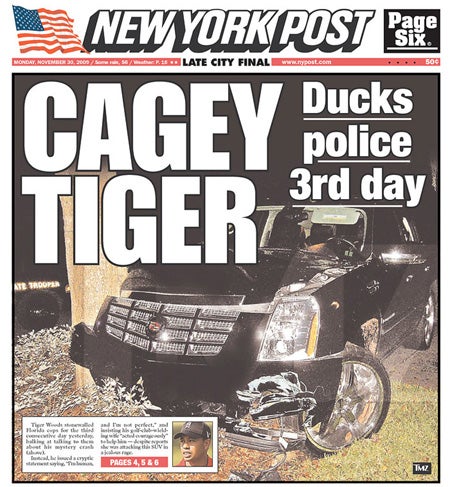 Tiger Woods gave the news media an early Christmas present over the Thanksgiving  weekend, wrapped up like an Escalade around a tree. And the news media – having resigned itself to stories about Black Friday and tired variations on the tryptophan theme — was ever-thankful for it.

“We love this,” MSNBC’s Dylan Ratigan admitted on his show Monday morning.

Woods’ bizarre 2:30 a.m. car crash – one that involved his golf club-wielding wife and rumors of marital indiscretions and resulted in the world’s number one golfer being knocked unconscious with apparent facial lacerations – was the topic across cable and sports news — even on "The View," where, as Jezebel notes, "Watching the ladies … dance around the most obvious implications of the Tiger Woods story was like watching a family at Thanksgiving trying to avoid mentioning an obviously pregnant teenager at the table."

The mainstream media’s curiosity is understandable. By Friday evening, “Tigerwoodswife” was a trending topic on Twitter.

ESPN had at least two correspondents camped outside Woods’ private Orlando residence. They even dedicated an entire category of their bottom line to “TIGER.” 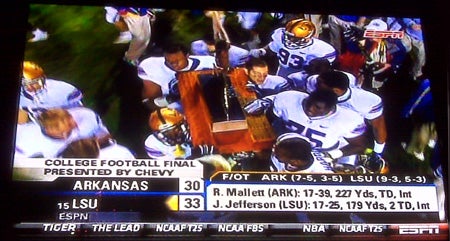 (Oddly, the Golf Channel did not appear to break away from its tournament coverage on Friday to report Tiger’s tale, at least when I checked.)

But perhaps no one in media was more thankful for Tiger’s shanked drive than newspapers, which had a weekend’s worth of front-page fodder that spilled over to the workweek. Here’s a selection from Monday. 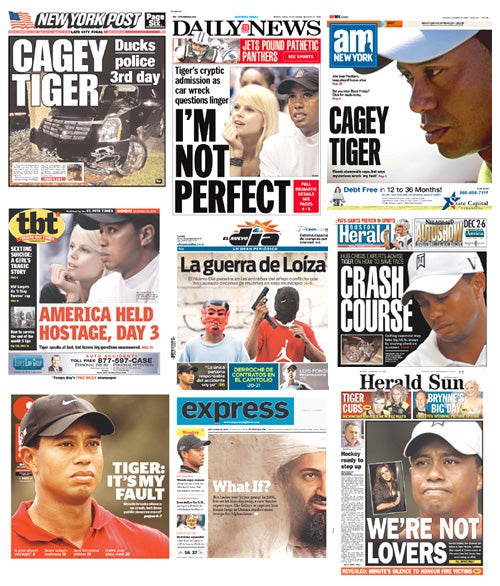 Note the difference in tenor between the Orlando Sentinel, ostensibly Woods’ hometown paper, and the Tampa Bay Times, which might be overstating it with their choice of headline. 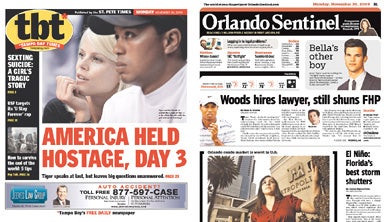