The Signature Theatre should be thanked for bringing an Arthur Miller rarity to the stage on the centenary of the playwright’s birth. The company’s revival of his 1964 play, “Incident at Vichy,” opened Sunday at Off Broadway’s Pershing Square Signature Center. It’s rarely revived for a couple of reasons: It requires a large cast of 16 male actors. And also, “Incident at Vichy” is one of his weaker efforts, which director Michael Wilson‘s production makes abundantly clear.

Reading every Miller play is much easier than seeing every Miller played performed live on stage. This “Incident” will interest aficionados. The playwright is brilliant at using his characters to deliver a number of arguments on the close nature of capitalism and fascism. The situation he puts those characters is also arresting:

A number of men have been taken off the streets of Vichy, France, in 1942 and brought to a warehouse to show their papers and be questioned by the occupying Nazis. When the Christians are taken into a separate room to be interrogated, they ultimately leave the warehouse. The Jews never leave the interrogation room, and so the warehouse begins to empty as these men are interviewed.

As the men debate what’s happening to them (are the Nazis only checking to see that their papers are authentic or are they being put on trains bound for concentration camps?), there are some astounding pronouncements. A painter (Jonny Orsini) claims that a strong work ethic is downright dangerous: “Whenever a people starts to work hard, watch out, they’re going to kill somebody….Look at the Germans — for a thousand years peaceful, disorganized people – they start working and they’re on everybody’s back.”

An electrician (Alex Morf) believes that when the workers finally unite that the Nazis will be defeated, to which an Austrian prince (Richard Thomas) says that his servants idolize Hitler.

Miller is at his best with the back and forth on whether the Nazis have no table manners or provide the world’s best audiences for music. The dialogue is both funny and devastating as it charts the crossroads of aesthetics and morality, and the cast effectively makes those speeches more than sound bites from Miller’s socialist playbook. 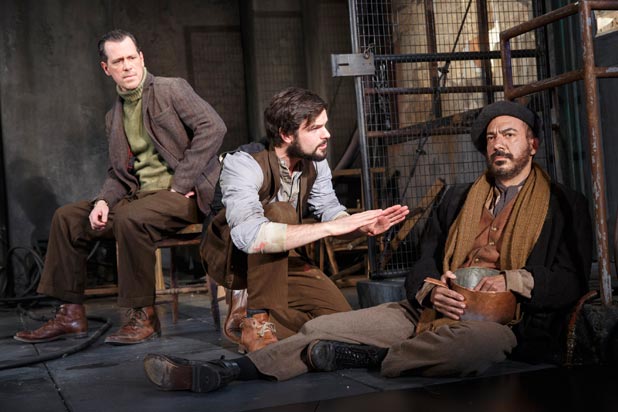 That’s the first half of the play. In the second half, Miller overreaches in bizarre ways. It’s presumptuous for a theater critic who never lived through World War II to criticize Miller on these points, but here goes: It’s hard to accept that a Nazi soldier (James Carpinello) would have a crisis of conscience in front of the very Jews he’s sending to Auschwitz, or that the prince, exposed as an anti-Semite, would set a Jewish doctor (Darren Pettie) free by giving him his own papers.

In the final moments of the play, the acting becomes extremely overwrought. Granted, it’s an overwrought situation, but the results on stage are mawkish.

Wilson takes a very naturalistic approach to the drama, right down to the walls of the warehouse, which are the color of “dead clams” as specified in the script. A more expressionistic approach might have made the characters’ final outbursts less jarring. To see how such a less grounded take can work, visit Ivo van Hove’s current Broadway revival of Miller’s “A View From the Bridge.”