Much has been made of Emmy-winning actress Julia Garner’s accent in the Netflix series “Inventing Anna,” in which she plays real-life fraudster Anna Delvey (aka Anna Sorokin). But while the “Ozark” actress was able to nail Delvey’s unique accent by watching interviews with the so-called “fake heiress,” it was only when she met Delvey in person that she unlocked a key aspect of Delvey’s personality: she’s charming.

“The thing that I got out of that meeting was how bubbly she was, how likeable she was, and how charming she was. And how much more complicated that made it, in a way,” Garner told TheWrap during a recent interview about the new Netflix show from creator and showrunner Shonda Rhimes. “And then it just made sense. She got what she wanted, to a point, because she is that way.”

Delvey was convicted of multiple counts of attempted grand larceny and theft of services in 2019, after she wedged her way into New York City high society with tales of a trust fund and rich German father – all of which was a lie. 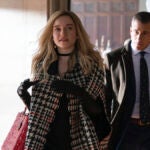 Delvey’s story is dramatized in the nine-episode limited series, streaming on Netflix starting Friday, and in preparation for her role Garner was granted access to interview footage between Delvey and the journalist on whose work “Inventing Anna” is based, Jessica Pressler. “I got different interviews from Shonda of Anna in jail being interviewed by Jessica Pressler, and that’s how I was able to get the accent, get different things that she does with her body,” Garner said. “But when I met her I just really wanted to get her energy and her spirit, and I wanted that to be in the show because that’s something that an interview is not going to capture because there’s still a camera. There’s still a filter, in a way. I wanted to hear her unfiltered.”

That unfiltered meeting is where Anna’s charming personality shone through, which Garner admits first made her approach to the character more complicated, until she realized it was exactly this charm that allowed Anna to succeed for so long without getting caught.

Garner admitted with a knowing laugh that her turn as Delvey was a “challenging performance,” and the show keeps much of Delvey’s true history and intentions ambiguous until the final episodes that dig into her family history. When asked about Delvey’s relationship with her father, Garner declines to speculate on the truth of the matter out of respect for Delvey’s privacy, but allowed that Delvey was clearly “afraid to fail in anything” and that fear of failure seemed to stem from her relationship with her family. 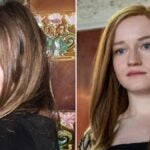