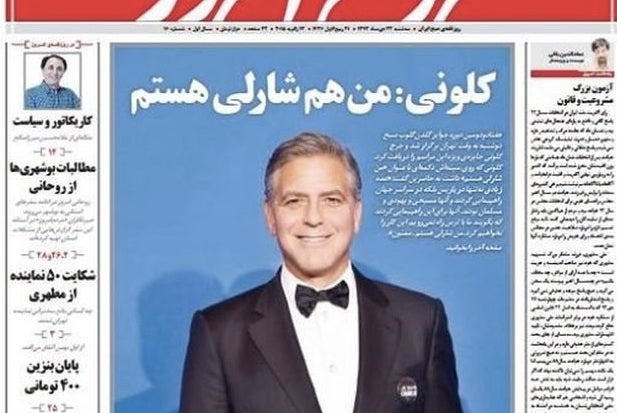 A judge has ordered that the Mardom e-Emruz newspaper in Iran be shut down after it published an image of George Clooney wearing a badge supporting Charlie Hebdo, the French satirical newspaper that was the target of a terrorist attack last week that killed 12.

The paper, which stands for “Today’s People,” only started publishing a month ago. After running the story with an image of Clooney at the Golden Globes wearing a “Je Suis Charlie” badge beneath the headline “I am Charlie too,” a judge revoked its permit.

“The court in charge of cultural affairs and the media imposed the ban on the newspaper for publishing a headline and a picture which it deemed insulting,” Mardom e-Emruz director Ahmad Sattari told the Islamic Republic News Agency (IRNA).

In response to the story, conservatives in Iran reportedly responded with fury and a judge called the story “obscene.”

Following the assault on Charlie Hebdo, Iranian President Hassan Rouhani condemned the action: “Violence and terrorism is reprehensible whether in this region, in Europe or in the United States.”

As TheWrap reported, media outlets in America have received brushback from their own talent in the aftermath of the Charlie Hebdo attack.

Personalities from both MSNBC and CNN have spoken up — in public and private — against their networks’ editorial policies, which prohibit showing Charlie Hebdo cartoons on-air.