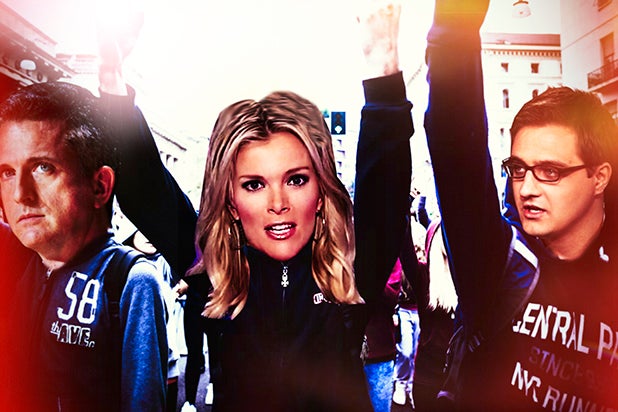 As the issue of censorship takes center stage in the wake of the murder of 12 editorial staffers at French satirical magazine Charlie Hebdo, a number of on-air hosts are challenging the people who sign their paychecks over editorial decisions.

CNN chief international correspondent Christiane Amanpour, MSNBC hosts Lawrence O’Donnell and Chris Hayes are among the anchors who have taken issue with their networks’ decisions not to show the Charlie Hebdo cartoons on the air.

On Thursday,  chief international correspondent Christiane Amanpour questioned network President Jeff Zucker’ decision not to air any Charlie Hebdo cartoons at a town hall meeting attended by worldwide CNN staff, an insider familiar with the meeting told TheWrap. “Zucker did acknowledge that the two disagreed,” the insider said, adding that Amanpour recounted the history of Muhammad as part of the exchange.

“For a week now, I’ve felt awkward and let you know that—to put it mildly—when discussing the Charlie Hebdo cartoons,” he said on his MSNBC program. “From the start, I’ve told you that the source of my discomfort is the fact that this network along with many other news media outlets including The New York Times will not show any of the cartoons that provoked all that killing.”

“For the record, I don’t agree with that decision” he said, later noting airing the cartoons is about newsworthiness and audience understanding. Earlier in the week, MSNBC star Rachel Maddow also seemed to take issue:

“The reason I am describing it to you instead of showing it to you is because we operate under NBC News rules and NBC News will not allow us to show it to you” (see below at 3:00 mark).

“It’s a strength that we have a diverse group of hosts with strong points of view, and they aren’t always going to agree on every issue or policy,” Rachel Racusen, Vice President of Communications for MSNBC, told TheWrap.

But Palestinian journalist Rula Jebreal—who in 2014, infamously called out MSNBC on its air for what she deemed as biased Israel/Hamas coverage—told TheWrap it’s a matter of trusting talent.

This latest wave of rebellion follows a number of other notable incidents in the past year, including Bill Simmons calling out ESPN executives on his podcast and Fox host Megyn Kelly challenging former vice president Dick Cheney over the Iraq war.

“Since Edward R. Murrow, television news talent have occasionally taken their complaints public,” former CBS News Vice President and Fox News President Joe Peyronnin told TheWrap. “When it happens, news management, which fiercely defends free speech, can find itself in an awkward position. But, depending on the specifics, it comes down on the side of free speech.”

Another MSNBC figure, Joe Scarborough, has developed a knack for taking not so subtle swipes at his employer.

In response to New Jersey’s state legislature clearing Gov. Chris Christie of wrongdoing in the 2013 George Washington Bridge controversy, Scarborough pulled no punches: “I actually turned on the TV because I was expecting to see people [MSNBC] that had been talking about it for eight months straight to say ‘guess what, nothing came of it.’”

This wasn’t the first time Scarborough called out MSNBC by name.

“I have sat here quietly and listened to BS being spewed all over this network and all over other networks. I can’t take it anymore,”  Scarborough said in response to St. Louis Rams players wearing “I Can’t Breathe” shirts to protest the Eric Garner grand jury decision.

In a recent wide-ranging interview, Scarborough’s executive producer, Alex Korson, told TheWrap that “Morning Joe” welcomes controversial discussion — including discussion that’s critical of the network on which it airs.

“Maybe the first time [Scarborough criticized MSNBC] it was like “how is this going to play,” Korson acknowledged. He pointed to his boss’ inclusiveness as a key factor in fostering an open, honest culture.

“[MSNBC President] Phil [Griffin], the way he leads and says, ‘Hey,  the only conservative on the network, and we have very, very progressive other hosts,’ so clearly we welcome a lot of different voices here at MSNBC. We’re never going to tell any of the hosts, ‘bite your tongue and don’t say how you feel.'”

Across the street, Fox News’ talent don’t often speak out against Chairman Roger Ailes’ editorial judgment, but in 2014, primetime star Megyn Kelly spoke out by giving Dick Cheney the toughest interview he’d ever experienced on the conservative network that usually offers the former vice president an open microphone.

“Time and time again, history has proven that you got it wrong as well in Iraq, sir,” Kelly said to Cheney, listing claims the former vice president made about the Iraq War that were later debunked.

This cross-examination by the attorney-turned-primetime-star was a pleasant surprise to media pundits who praised Kelly for stepping away from the typical, rinse-and-repeat interview Cheney has received on conservative networks.

A political comedian who’s appeared on both Fox News and MSNBC pointed to a different type of network censorship.

“Networks like Fox and MSNBC limit freedom of speech not by telling talent what to say, but by booking guests with little or no diverse view,” Scott Blakeman, who’s producing a Charlie Hebdo fundraiser, told TheWrap. “A typical show is the host saying, ‘This is what I think and here are three people who agree with me.'”

If the aforementioned examples subtly knocked their networks, ESPN’s Simmons all but challenged ESPN executives to a duel. During a fiery rant in September, he called NFL Commissioner Roger Goodell a liar in response to Goodell’s claim he never saw elevator footage of Ray Rice knocking out then-fiancee Janay Palmer.

“Goodell, if he didn’t know what was on that tape, he’s a liar,” Simmons said. “I’m just saying it. He is lying. I think that dude is lying.”

“I really hope somebody [from ESPN] calls me or emails me and says I’m in trouble for anything I say about Roger Goodell, because if one person says that to me, I’m going public,” Simmons said. He got his wish — he was suspended by ESPN.

“Every employee must be accountable to ESPN,” the network said in a statement. “Bill Simmons did not meet those obligations in a recent podcast, and as a result we have suspended him for three weeks.”

Simmons quietly returned following his suspension, making no mention of his bosses’ decision to give him a timeout. But the impression was left — a sports commentator defying the mighty ESPN had lived to fight another day.

With these array of top media figures spiking up their volume, the old TV saying applies.

Don’t change that channel as this story continues developing.