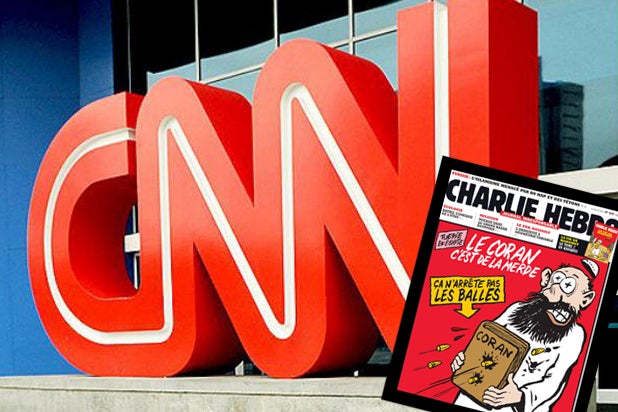 Cable news networks are censoring coverage of the Charlie Hebdo cartoons that led gunmen to attack the satirical Paris-based newspaper Wednesday. Both CNN and MSNBC admit to limiting use of the original cartoons depicting, among other subjects, the Prophet Muhammad per their respective corporate policies.

The networks — along with many other media outlets, including TheWrap — have been heavily covering the terror attack that killed 12 people, including journalists from the weekly paper as well as two police officers.

One of the Charlie Hebdo terror suspects has been killed and two others arrested, NBC News and MSNBC reported Wednesday evening. The men — brothers Said Kouachi and Cherif Kouachi, and Hamyd Mourad — are part of a large Yemeni terrorist network, NBC reported.

The big three cable news networks have all been covering the story since it broke Wednesday morning, with network talent commenting on their network’s editorial judgment call over whether to show controversial Charlie Hebdo cartoons on-air.

“Many news outlets are making very difficult decisions about whether to show some of these cartoons,” CNN’s Brian Stelter said Wednesday afternoon. His network has opted against showing the cartoons, many of which mock Muslim figures like the prophet Mohammed.

“As this distressing story continues to evolve we are actively discussing the best way of addressing the key issues and images across all of our platforms,” a CNN spokesperson told TheWrap. “Those conversations will continue throughout the day and beyond as the story develops.”

NBC News and MSNBC are going on a more case-by-case basis regarding which cartoons to show.

“Our NBC News Group Standards team has sent guidance to NBC News, MSNBC, and CNBC not to show headlines or cartoons that could be viewed as insensitive or offensive,” an MSNBC spokesperson told TheWrap.

An insider familiar with MSNBC’s editorial policy told TheWrap the network may show some of the cartoons but not those depicting the prophet Muhammad.

Also Read: In the Face of Attack on French Newspaper Charlie Hebdo: We Must Publish, Print, Stand Our Ground

Fox News has not yet responded to TheWrap’s request for comment regarding their editorial policies on showing cartoon images.

TheWrap will monitor the evening news broadcasts and cable news primetime Wednesday to see which networks censor images and which decide to show certain cartoons.