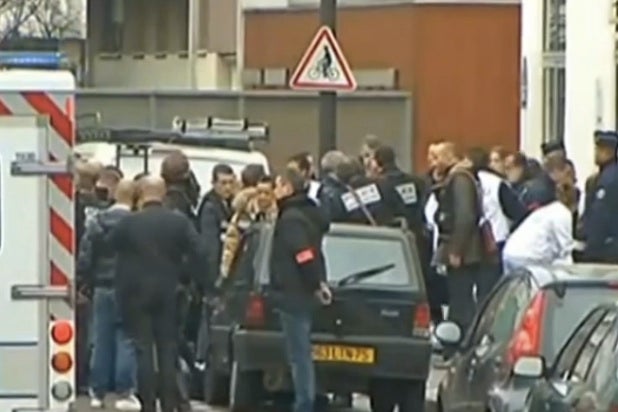 NBC News reported that one of the Charlie Hebdo terror suspects was killed and two others arrested on Wednesday evening, citing two senior U.S. counterterrorism officials. However, French news outlets could not confirm the report and NBC appeared to backtrack shortly thereafter.

Later, NBC’s Justice Department correspondent Pete Williams, who reported the developments on “Hardball” in the 7 p.m. ET hour, said he was no longer certain of the status of the suspects at the top of  8 p.m. ET’s “All In” with Chris Hayes.

“To be fair here we just don’t know exactly what the situation is in France tonight” he said on MSNBC. “We were told earlier this evening from two U.S. counterterrorism officials that one person was dead and two have been arrested, but there are other U.S. officials that say they haven’t been told that.”

“Just to repeat, a short time ago we learned from senior U.S. counterterrorism officials; they are telling NBC News of these three masked men sought all day, one is dead, two in custody,” Williams reported at 6:41 p.m. ET.

“NBC News issued an earlier report based on intelligence from two consistently reliable U.S. counterterrorism officials in different government agencies. As soon as it became evident that our sources doubted their information, we immediately updated our reporting across all platforms and continue to do so as this fast-moving story unfolds.”

Fox News also erroneously reported that one suspect was dead and two had been arrested, citing “unconfirmed reports.”

“We are getting reports — unconfirmed reports — that the manhunt for the three people involved in this brutal attack might be in custody and dead,” Greg Palkot reported from Paris. “There are reports that one was killed and two are under arrest in the midst of that raid in Reims which is a city about 90 miles away from here in Paris.”

Fox News has not yet responded to TheWrap’s request for comment regarding their reporting.

CNN did not report the information and said throughout the evening that police were conducting a house-to-house search for the suspects. Late Wednesday, CNN reported that an 18-year-old suspect had surrendered to police. The network cited the Agence France Presse news agency and said it had not “independently confirmed” the report.

Paris-based network France 24 also reported and tweeted that one of the suspected gunmen had surrendered.

The men — brothers Said Kouachi and Cherif Kouachi, and Hamyd Mourad —  are part of a large Yemeni terrorist network, according to media reports. Kouachi was said to have been previously imprisoned in 2008, serving 18 months on terrorism charges for assisting funnel fighters to Iraq’s insurgency.

Authorities believed the killers were part of a well-trained Islamic extremist network due to their masks and militaristic precision in carrying out the attack.

French news network Infos140 reported: “Raid underway in Croix-Rouge sector of Reims,” Wednesday night. The network also reported the youngest of the three suspects, Hamyd Mourad, went to Charleville-Mezieres—a commune in Northern France — and his friends said he was in class Wednesday morning.

The terror attack killed at least 12 people at the offices of the French satirical newspaper. Another 11 people were injured, four of them seriously.

Various media outlets described the weekly newspaper as similar to U.S. satirical sites and television shows ranging from “The Onion” to “The Daily Show.”

In 2011, the newspaper’s office was firebombed after an issue mocked the prophet Muhammad.