A terror attack killed at least 12 people at the offices of French satirical newspaper Charlie Hebdo on Wednesday morning. Another 11 people were injured, four of them seriously.

On Wednesday evening, NBC News reported that one suspect had been killed in a police raid and two others were arrested. 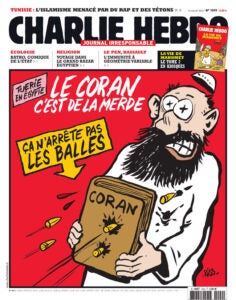 French police said at least two armed gunmen walked into the offices of the satirical newspaper and opened fire with Kalashnikov AK-47s, shooting down  journalists. They were apparently angry over the paper’s spoof pieces on the prophet Muhammad. Shocking images also showed the hooded gunmen wielding their machine guns at a police car on the streets of Paris.

Also Read: Sony Hack: What Are US Options If North Korea Is Confirmed as Cyberterrorist?

France’s President François Hollande condemned the attack on the weekly newspaper as an act of terrorism: “We are at a very difficult moment,” he said. “Several terrorist attacks have been impeded during the previous weeks. We are threatened because we are a country of freedom.”

He went on to say, “an act of exceptional barbarism has been committed in Paris against a newspaper. A paper, in other words, an organ of free speech. An act against journalists who had always wanted to show that in France it was possible to defend one’s ideas, and exercise their rights that are guaranteed and protected by the Republic.”

President Obama also condemned the attack, expressing “my deepest sympathies to the people of Paris and the people of France for the terrible terrorist attacks that took place earlier today…  For us to see the kind of cowardly, evil attacks that took place today I think reinforces once again why it’s so important for us to stand in solidarity with them just as they stand in solidarity with us.”

Earlier the president issued this statement:

“Time and again, the French people have stood up for the universal values that generations of our people have defended,” he said. “France, and the great city of Paris where this outrageous attack took place, offer the world a timeless example that will endure well beyond the hateful vision of these killers. We are in touch with French officials, and I have directed my administration to provide any assistance needed to help bring these terrorists to justice.”

“The murders in Paris are sickening,” British Prime Minister David Cameron said on Twitter. “We stand with the French people in the fight against terror and defending the freedom of the press.”

TV news networks have pivoted to wall-to-wall coverage of the attack as at least two masked gunmen currently remain at large. The offices of the satirical newspaper — which produces cartoons, reports, polemics, and jokes — had previously had heavy police protection, but reports suggest that protection has dwindled in recent months. Buildings near the shooting in central Paris are currently on lockdown.

TV news networks report the attacks were sophisticated and coordinated, carried out by professional gunmen. Reports are suggesting the two gunmen had help from a wider network of terrorists.

“This violent extremism is something the world has been dealing with for more than a decade now,” Earnest said on “Morning Joe,” adding that the White House isn’t ruling out that terror group ISIS had a hand in this attack.”Shutting off the funding for ISIS has been a core component of our strategy.”

He added the White House is in close touch with their French counterparts:

“Obviously, State Department officials in France and over in Foggy Bottom here in Washington, D.C., will be responsible for ensuring that our American diplomats are safe in France and around the world,” Earnest said. “And I’m confident that that’s something that they’re evaluating right now.”

U.S. defense officials announced there is no decision to increase security at the U.S. Embassy in Paris.

Charlie Hebdo writes often savagely critical satire about French politics, and does not spare Islam. Last year, Islamic groups tried to sue the magazine for blasphemy over a cover (pictured above) with a cartoon of an imam, saying, “Islam is s—.”  Its website was hacked in 2012 and its offices firebombed in 2011, both over shocking send-ups of Islam’s prophet, Muhammad.

The newspaper’s most recent cover joked about author Michel Houellebecq’s new novel “Submission,” which speculates about a future in which France elects a Muslim president.