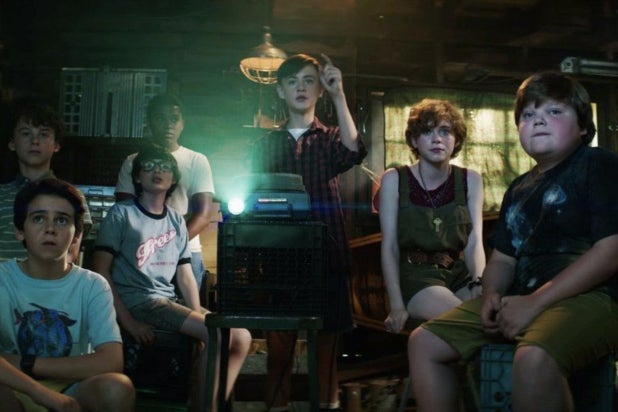 (Spoiler alert: The following contains very mild spoilers about “It,” which you should go see, because it’s great.)

One of my favorite things about “It,” the new Stephen King adaptation that comes out today, is how much it reminds me of being 14 in 1989.

The setting of the story has been shifted from the 1950s to the late 1980s, which might make some people unhappy — if they grew up in the 1950s. But for me, and I’m sure many other people who were kids in the late ’80s, the new “It” beautifully reanimates one of the strangest, scariest times of our lives.

Also Read: Why Searching for 'It' Online Is Like Looking for Pennywise in a Sewer

1. Batman. Nothing in “It” made me feel more situated me in the summer of 1989 than the fact that the movie house in downtown Derry, the film’s setting, has “Batman” on the marquee. When I was a nerdy kid, that movie was my world. When I graduated from junior high, my mom rewarded us by driving me and my best friend (what’s up, Juan?) to the Old Town Mall to see “Batman.” (Twenty-eight years later, I know the release date was June 23, without having to Google it, because I spent so many months staring at the Bat-logo and the release date on the poster. Waiting.)

My mom and I got in a fight about something during the drive — I think involving my report card? — and I choked back tears to scream at her, “You’ve done it — ruined ‘Batman’!”

But she hadn’t, because nothing could.

2. The music. Everyone who didn’t live in the ’80s thinks they were all about synth pop. No. That was elementary school. By junior high, we listened to hip-hop (we called it rap) and metal, mostly hair bands. The kid in the Anthrax shirt? “It” nailed it. The Losers listening to Young MC’s “Bust a Move” on a boombox? Nailed it perfectly. We loved Young MC and Slick Rick and Tone Loc and Ice-T. All my friends had boomboxes then, and the most state-of-the-line junior high technology was a boombox with a dual tape deck.

Here is one of the more embarrassing sentences I can write: In 1990, I rode bikes with two girls I had crushes on to the tide pools near where we lived in San Pedro, Calif., and danced very briefly with one of them to a boombox playing Extreme’s “More Than Words,” before we got embarrassed and stopped.

That’s the vibe “It” goes for in the love triangle between Bill and Ben and Bev — and the film captures the mix of excitement and awkwardness in all its fluttering glory.

3. Abandoned houses. I guess real estate wasn’t as valuable in 1989 as it is now? For some reason, there was a huge decaying house a few blocks away from where my family lived, and Juan and I used to sneak in and pick through the cobwebs, dust and old magazines. I wonder if it’s still there.

4. The insults. There was no more vicious insult for boys in the late ’80s — when televangelists poisoned our minds, the AIDS crisis was at its height and almost no one was out — than the F-word that rhymes with bag.

Our parents did the best they could to make us stop saying it, but we were scared and immature and uncertain of our own masculinity — because we weren’t men. Homophobia is so central to the novel “It,” which I’ve recently started reading, that it’s hard for me to remember how much homophobia is overt in the movie and how much is implied. But the book and the movie make a point every child infected by ’80s hate had to learn, or suffer from not learning: Don’t let some clown divide you. As long as anyone is a victim, no one is free.

5. The rampant violence. From what I gather, kids today don’t spend that much time outside, much less going all “Hunger Games.” Here are a few things I remember from being a kid in the late ’80s and early ’90s:

One day at the bus stop, I asked a fellow fat kid how many sit-ups he could do. It turned out we could both do more than 60 in a minute. “Fat people are good at sit-ups,” I said. He nodded. “That’s why you’re good at them. I don’t know why I’m good at them.”

He didn’t like that. His blond mullet shimmering, he reared back for a swing at me, which I avoided by flinching backward so that, rather than connecting with my face, his fist grazed the edge of my braces — which slashed open the meat of his palm. Does it get any more Stephen King than that? Actually, yes: The next day, he smacked the hell out of me in front of a girl I liked. (What’s up, Tiffany?)

I don’t know what Taylor Swift was thinking when she named a breezy pop album “1989.” It was a pretty tough year, and “It” gets that.