Cat-and-mouse extravaganzas are rarely as enjoyable as “Jason Bourne,” and when they are, it’s most likely because they’re the previous installments in this still vital rogue-agent franchise — that is, the ones directed by Paul Greengrass (“The Bourne Supremacy,” “The Bourne Ultimatum”). Perhaps today’s master practitioner of jagged action, Greengrass can turn fistfights and chases into collision art. And after last year’s slick-and-tired 007 retread “Spectre,” being reminded of the Bourne saga’s grittier thrills is welcome, indeed.

Once more pitting Matt Damon‘s memory-challenged, unsmiling killing machine against the omniscient U.S. intelligence network that built him, and sporting the kind of dizzying action that heats up your processors like a furiously charging battery, this fourth entry after a nine-year break for Damon and Greengrass should represent, for those ready and able to separate popcorn mayhem from the grim realities of world headlines, a bruising and exhilarating ride.

Of course, Greengrass, who last made the nervy pirate saga “Captain Phillips,” intends for his dark-op thrills to have an op-ed flavor, and this “Bourne” is no different, updating the War on Terror-inspired details of the previous films — profiteering, hidden rendition programs — with the state of world upheaval and threat-response as it exists today. In this case, it’s economic collapse and a capitalist power confab as bookends. A frantic early barnburner sequence sends car after motorbike through the smoke, fire and anger of austerity riots in Athens, while the Las Vegas-set climax hinges on the conscience of a privacy-defending social media tech magnate (Riz Ahmed, “The Night Of”) before, naturally, it hews to action flick protocol: a car pursuing a SWAT truck down a busy, neon-lit Vegas strip. 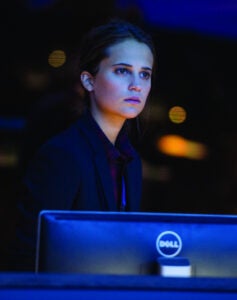 Bourne’s role, as ever, is that of conspiracy spoiler, but only as it pertains to his need to color in the missing pieces of his stolen biography, again presented as jarring flashbacks. After years off the grid — we first see him scrapping bare-knuckled for money near the Greece-Macedonia border — he’s lured into the open by the promise of learning the truth about his deceased dad (Gregg Henry), a CIA analyst who might have had something to do with the nefarious Treadstone program that molded Bourne (a.k.a. David Webb) into an assassin. The scariest kind of prodigal son, he makes the personal political, and by his remorse for his deeds, a little patriotic, too.

The information comes via ex-CIA operative Nicky Parsons (Julia Stiles), a Bourne ally-turned-Snowden-esque hacker whose breach of the agency’s mainframe to steal black-ops files triggers a hunt led by the spook outfit’s flinty cybersecurity head, played with bloodhound smarts by new Oscar winner Alicia Vikander. Her boss, eager to prevent a leak that could expose an in-the-works and controversial program, is played by Tommy Lee Jones. Though he’s another in this series’ long line of dishonest, kill-ordering bureaucrats, Jones gives his scenes an extra patented frisson of world weary contempt.

It wouldn’t be a “Bourne” movie without a terrifyingly persistent hitman on our hero’s heels, and this time it’s the eely Vincent Cassel, only ever referred to over headsets as The Asset, which about sums up his value here as a Terminator-like nemesis. He makes surveillance, sharpshooting and vehicle-commandeering into a villainous triathlon of sorts, giving Damon’s well-honed talent in moving efficiently across the frame, and conveying a lethal urgency, a run for the money.

And it’s that emphasis on cunning kineticism that may explain why Greengrass chose to collaborate on the screenplay with his longtime editor Christopher Rouse. If anyone’s had as profound an impact on the stampeding narratives of these movies as Greengrass has, it’s Rouse: his legendary action cutting (in this film as well) embraces both the whiplash intensity of run-and-gun shots and the shifting timings of a sequence that might move from foot-chase to car-chase without sacrificing spatial cohesion or story detail.

What Greengrass, Rouse and cinematographer Barry Ackroyd do is trancelike, frankly, and it gives “Jason Bourne” — like the other movies, thick with set pieces that zigzag from computer screens to talking heads to street-level danger in far-flung places — a beautifully brutalizing rhythm. (The sound design, too, is top notch, as is the propulsive score by John Powell and David Buckley.)

Damon, meanwhile, is the onscreen constant; a little older, but no less sculpted to punish, he’s thief-like as he sneaks breaks in the action — a look in the mirror, interrogating a source — that give him a chance to show the toll of someone with a past to reckon with, both hunter and hunted. At one point, Bourne finds a gun in a bag, and in the way he lets it sit in his hand, we sense a trained, reformed killer weighing the power of a tool that’s allowed him to inflict untold damage in his previous life.

As these movies excitedly demonstrate, Bourne’s brains, fists and driving acumen are arsenal enough. But it’s still the kind of reflective, mindful moment about violence that sets “Jason Bourne,” and Greengrass’s shepherding of this franchise, apart from the rest of the blockbuster crowd.