President Joe Biden is expected to name Jessica Rosenworcel chairwoman of the Federal Communications Commission. She has been the acting chairperson since January and will be the first woman to permanently serve in the role.

The news of her impending promotion was first reported by the New York Times, which added that Rosenworcel has “campaigned vigorously for a permanent appointment.” A nomination is only the first step toward making her job permanent. The Senate would need to vote to confirm her.

Then-president Barack Obama first nominated her to the FCC in October 2011, but her confirmation hearing was delayed four months. She was confirmed unanimously in 2012. Obama renominated her in 2015, but she was not confirmed by the Senate in time to stay in her role after Donald Trump took office in 2017, when she was required to vacate it. Trump subsequently renominated her. 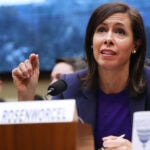 Also Read:
FCC to Scrutinize the Rise in Those Annoying Loud Commercials

The FCC is the organization responsible for regulating radio, television, wire, satellite and cable communications throughout the country.

The regulator scored a big win under Rosenworcel’s interim leadership in April as the Supreme Court decided, in a unanimous decision, that the FCC was well within its rights to loosen restrictions regarding media ownership rules.

In 2017, the FCC, led by Trump-appointed chairman Ajit Pai, proposed changes that would strike down the “Eight Voices Rule,” a ban on in-market consolidation of stations if the result would lead to fewer than eight independently owned stations Additionally, the FCC voted to remove a 45-year-old rule that bars one company from owning a TV station and newspaper within the same market (although a few exceptions have been made), along with restrictions on local media advertising.