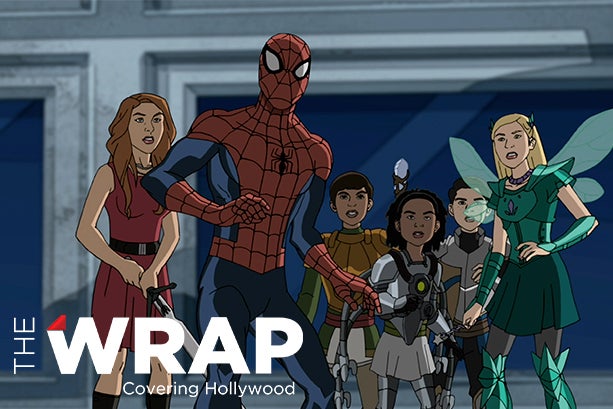 Debby Ryan and the cast of “Jessie” will be getting into a new sort of adventure when they cross over to Disney Channel’s animated series “Ultimate Spider-Man: Web-Warriors.”

In the exclusive photos (below), “Jessie” cast members Ryan, Peyton List, Cameron Boyce, Skai Jackson and Karan Brar are seen in the recording studio to voice their characters for the animated crossover episode of “Ultimate Spider-Man.”

See video: Donald Glover Gets to Be Spider-Man, After All–In a Cartoon

The five cast members get animated for the Halloween-themed episode which finds the Manhattan nanny (Ryan) in possession of a medieval sword coveted by the infamous Morgan Le Fey. Jessie and Spider-Man then must team up to save Halloween and the world from Le Fay’s evil plans.

Both “Jessie” and “Ultimate Spider-Man” are currently in the midst of their third seasons. This will mark the first crossover between a Marvel property and a Disney Channel live-action series.