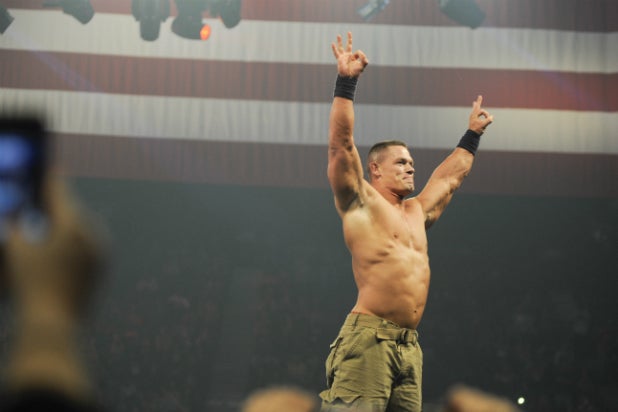 “Wait a minute,” Lashley responds in the trainer’s room, where Balor-rival Corbin is nursing an injury. “I thought that tournament was already full? Who am I replacing?”

Cena was the only competitor in the eight-person field who did not win a World Cup Tournament qualifying match — he’s just a huge star that WWE (and, likely, the Saudi royal family) wanted at the high-profile event.

Ironically, now Lashley is the only one who technically didn’t win an official qualifying match. Due to disqualification, he didn’t even win last night’s regular match against Balor.

It has been rumored and reported for a few weeks now by wrestling blogs that Cena would end up bailing on his commitment if WWE staged the show in Saudi Arabia as originally planned. He has a blossoming movie career to protect.

“As always, we maintain an open line of communication with our performers and will address each situation accordingly,” a WWE spokesman told TheWrap on Oct. 25, when we inquired about Cena’s status.

Reps for Cena, who opened April’s “Greatest Royal Rumble” event in Saudi Arabia with a win over Triple H, never got back to us.

The question now shifts to what “SmackDown Live” wrestler Daniel Bryan will do. Bryan is currently scheduled and being advertised to challenge for A.J. Styles’ WWE Championship at “Crown Jewel,” though he has also reportedly told WWE he’s out.

“Crown Jewel” in Saudi Arabia almost didn’t happen for anyone. On Oct. 11, a spokesman for the professional wrestling promotion told TheWrap that they are “currently monitoring the situation” in Saudi Arabia.

The brief statement was WWE’s first acknowledgement of the circumstances surrounding deceased Washington Post columnist Jamal Khashoggi, a Saudi Arabia native who had been critical of the country’s royal regime. U.S. and Turkish officials both believed that Khashoggi may have been murdered by his own government, or that he was killed with Saudi Crown Prince Mohammed bin Salman’s knowledge. At the time, Khashoggi had been missing for more than a week after going to the Saudi consulate in Istanbul to obtain wedding papers.

Saudi officials now acknowledge his murder, and have admitted that it was possibly premeditated. As the news of the horror progressed, it became less likely that WWE would go ahead with event in Saudi Arabia.

“Crown Jewel” is the latest in WWE’s massive push into expansion in the oil-rich nation. It will follow April’s “Greatest Royal Rumble” event, which took place at the King Abdullah Sports City Stadium in the Saudi city of Jeddah.