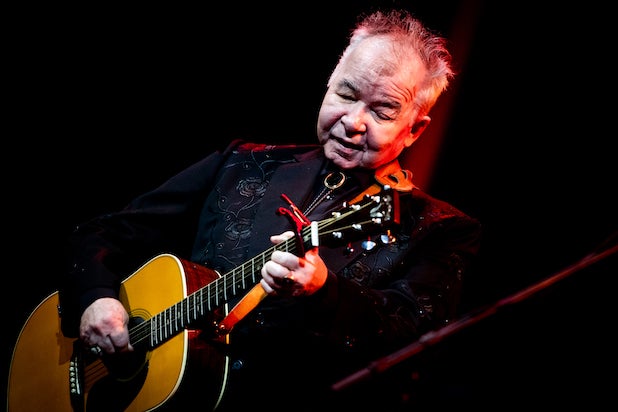 John Prine, one of the most influential and revered folk and country songwriters of the last 50 years and an unassuming man who was still producing quality work after two bouts with cancer, has died at the age of 73 after being infected with the COVID-19 virus.

Prine died in a Nashville hospital on Monday, according to the New York Times. His wife and manager, Fiona Prine, tested positive on March 17 and the couple entered quarantine at that point.

John Prine’s initial test, Fiona said on social media that day, had been inconclusive, but the Prine family said on Sunday that John developed COVID-19 symptoms on Thursday, March 26, and was hospitalized that day and was intubated on Saturday and in critical condition on Sunday.

Prine was nominated for 10 Grammys over the course of his career, including Best New Artist in 1973. He won the Recording Academy’s Hall of Fame Award in 2015 and the Grammy Lifetime Achievement Award earlier this year. He was also elected to the Songwriters Hall of Fame in 2019 and became the first songwriter to perform at the Library of Congress in the fall of 2018.

But Dylan was far from his only notable fan. Prine became a favorite of other songwriters from the moment he began performing his songs in public during that city’s folk revival of the late 1960s. “I didn’t think anybody was ever going to hear the songs I was writing,” he once said of his days, fresh out of the Army, when he was a full-time mailman and part-time songwriter. “I was just messing around on my own, doing whatever I wanted to just see if it would work.”

But his songs attracted attention when he began performing at clubs in Chicago; one early fan was a hometown journalist, Roger Ebert, who was knocked out by a Prine show and wrote what Ebert said was Prine’s first review: “After a song or two, even the drunks in the audience begin to listen to his lyrics. And then he has you.”

Singer-songwriter Kris Kristofferson became a fan even faster than the drunks in Ebert’s audience when Prine auditioned for him in an empty club after one of Kristofferson’s own shows in Chicago. The result was chronicled in the liner notes that Kristofferson wrote for Prine’s first album:

“[H]e started singing, and by the end of the first line we knew we were hearing something else. It must have been like stumbling onto Dylan when he first busted onto the Village scene … Twenty-four years old and he writes like he’s two hundred and twenty … We went away believers, reminded how goddamned good it feels to be turned on by a real creative imagination.”

In short order, Kristofferson helped Prine land a deal with Atlantic Records. His first album, released in 1971 and titled simply “John Prine,” was one of the most impressive debuts of the era. The album contained a string of classics that included “Angel From Montgomery,” a wrenching character study later memorably covered by Bonnie Raitt; “Hello in There,” the heartbreaking story of an elderly couple that would be recorded by Bette Midler, among others; the Vietnam-vet elegy “Sam Stone”; and the timely and sardonic “Your Flag Decal Won’t Get You Into Heaven Anymore,” which punctured the easy patriotism of the Richard Nixon era. It introduced Prine as an uncommonly astute and compassionate observer of humanity, and also as a damn funny wordsmith.

The album was not a big seller despite its enormous appeal to critics and other songwriters, and subsequent work did not change his commercial prospects. But through two dozen albums over nearly 40 years, Prine remained a hugely influential songwriter who was held in high esteem by his peers in folk and country music.

With a gruff, plain voice that drew inevitable comparisons to Bob Dylan (the early 1970s being a fertile period for “New Bob Dylan” comparisons), Prine was a modest, self-effacing performer who tossed off his brilliant songs casually. But he was also impossible to keep down: When none of his seven major-label albums made much of a dent on the sales charts, he and his manager formed their own record label, Oh Boy. The label would release his albums for the next 30 years, including two that won the Grammy for Best Contemporary Folk Album, “The Missing Years” in 1992 and “Fair & Square” in 2006.

Over the years, Prine’s notable songs, which displayed his typical blend of wry humor and deep compassion, would come to include “Christmas in Prison,” “Dear Abby,” “Come Back to Us Barbara Lewis Hare Krishna Beauregard,” “Sabu Visits the Twin Cities Alone,” “Unwed Fathers,” “Speed of the Sound of Loneliness,” “It’s a Big Old Goofy World,” “In Spite of Ourselves,” “Summer’s End” and “Knockin’ on Your Screen Door.”

“Writing is about a blank piece of paper and leaving out what’s not supposed to be there,” Prine wrote to introduce his 1993 compilation “The John Prine Anthology: Great Days.” “There were many great days and many not so great days. I tried to turn them all into great songs.”

Prine also fought two battles with cancer — first in 1998, when he needed a year of speech therapy after surgery for squamous cell cancer removed part of his neck, and again in 2013 when lung cancer necessitated the removal of a lung.

But he continued to tour and to make music — and over the years, he became a revered elder statesman in the Americana genre. The phrase elder statesman, though, might make him sound too much like an influence rather than an active participant. Some of his best work came late in his career — particular his 2018 album “The Tree of Forgiveness,” his first collection of new songs in 13 years, his highest-charting album ever and in many ways one of the most eloquent, most touching and funniest albums he’d made since “John Prine” 47 years earlier.

“The Tree of Forgiveness” ended with “When I Get to Heaven,” which served as something of a punchline to the album and now must serve the same purpose to a remarkable career and a remarkable man.

“When I get to heaven
I’m gonna shake God’s hand
Thank him for more blessings
Than one man can stand
Then I’m gonna get a guitar
And start a rock ‘n’ roll band
Check into a swell hotel
Ain’t the afterlife grand?”