A nasty war of words has broken out between Jon Gosselin and TLC, with Papa Jon demanding the cable network stay out of his house.

TLC is fighting back, calling Gosselin "self destructive" and "unprofessional." But the network also said it’s suspended filming any scenes involving the Gosselin kids. 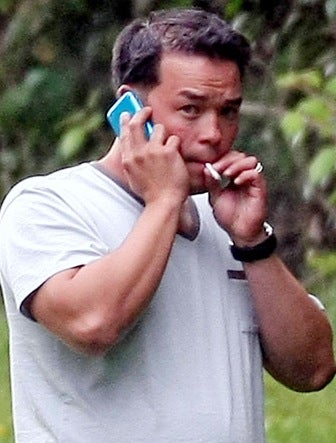 The latest chapter in the Gosselin affair began when Entertainment Tonight’s website broke the news that Gosselin’s camp had sent TLC a cease-and-desist order, demanding they stop filming in his house. Gosselin’s reps are now claiming TLC hasn’t properly paid his kids and didn’t secure proper permits to film.
He also says TLC’s filming of his kids would be detrimental to their health, ET reported.
Finally, Team Jon claims TLC’s decision to change the name of its show to "Kate Plus 8" (dropping Jon from the title) renders any previous agreement void.
"A new program known as ‘Kate Plus 8’ would certainly require the acquiescence and consent not only of Kate Gosselin but Jon Gosselin, who is the father of the eight Gosselin children, which consent Jon has not given," Gosselin’s lawyer, Mark Jay Heller, told ET. "If necessary, Jon is prepared to seek court intervention to make sure his children’s best interests are protected."
Heller explained Jon’s actions as being in the best interest of his kids.
"Jon realized his family was like a trainwreck, so he decided to put the brakes on the divorce and on the show … because if he didn’t the family would be in a mortal accident … the victims of a trainwreck," he told ET.
But TLC isn’t staying quiet. The network put out a tough statement Thursday morning that noted Gosselin had no problem participating in filming of the show as recently as Friday, despite his new claims that TLC’s filming hurts his kids.
"We are aware of Jon Gosselin’s recent statements, and remain deeply disappointed at his continued erratic behavior," the network said. "He and the family were shooting as recently as last Friday, without incident, and his latest comments are grossly inaccurate, without merit and are clearly opportunistic. Despite Jon Gosselin’s repeated self destructive and unprofessional actions, he remains under an exclusive contract with TLC."
All that said, TLC added that "direct filming of the children has been currently suspended, pending further conversations between both parents."
Just to add to the drama, Jon Gosselin has also posted a giant sign at the gate of his house telling TLC folks they are not to step foot in his castle, ET also reported.
"Notice: No film crew or production staff from TLC is permitted on this property under penalty of trespass," the sign reads. It spells "penalty" as "penelty" and includes Gosselin’s full name, Jonathon Gosselin.