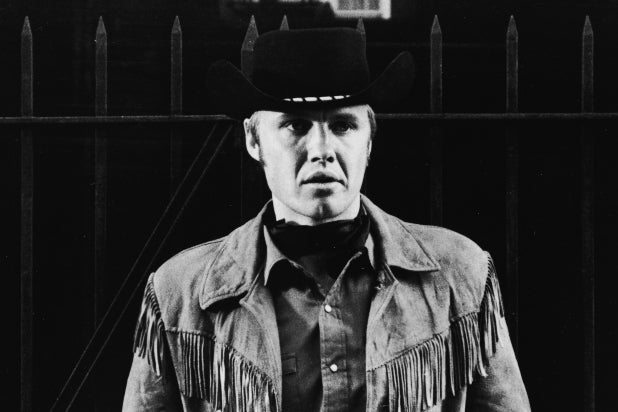 Aspiring young actors in New York in the 1960s came in many shapes and psyches. There were angry ones and cynical ones and sincere ones and intense ones. But there weren’t many joyful ones. The road was too hard and it was strewn with failure. “No one starts at the top in the theater,” Gene Hackman once said, “and the bottom is a very ugly place.”

Jon Voight was an exception. He was driven, compulsive and uneasy. But he also loved his work and his fellow actors, and he was confident that if he pushed himself hard enough and got a break or two along the way, he would succeed. The break he was waiting for was “Midnight Cowboy.”

More than 50 years later, Voight’s extraordinary talents as an actor have been overshadowed by his extreme right-wing politics — he’s called Donald Trump “our greatest president since Abraham Lincoln” — and tabloid coverage of his rocky relationship with celebrity daughter Angelina Jolie. But the Jon Voight who won an Oscar nomination for Best Actor for his first film role was a consummate professional with boy scout ethics and a singular dedication to his craft.

He was born and raised in Yonkers, New York, a blue-collar city a half-hour’s drive from Times Square, the middle son in a family of high achievers — his older brother Barry is a distinguished geologist, while his younger brother James wrote the hit songs “Wild Thing” and “Angel of the Morning” under the stage name Chip Taylor. Their father, Elmer, was a golf pro and an avid, utterly entertaining story-teller. Jon went off to Catholic University in Washington, D.C., with hopes of studying theater design. But after reading a book about Laurence Olivier and other great Shakespearean actors, he caught the acting bug and decided to go to drama school. Angst never clouded his vision. “Once I made the decision to go to New York and start school again and learn to act, I was at peace,” he says. “I never had the thought that I was just testing it. I knew what I needed to do and I knew that I wouldn’t give up.”

Despite his soft, warm looks, Jon Voight was a complex, moralistic person, passionate about his art and demanding of himself and others. He questioned seemingly every line, scene and gesture in every movie he acted in. Jennifer Salt, an aspiring actress who became Voight’s girlfriend during the “Midnight Cowboy” film shoot, says he was deeply devoted to his work. “He was so confident of his acting,” she recalls. “Not conceited, but he just loved it and his mind worked in very imaginative ways.”

It was hard for him at first. Voight was a 6’3”, apple-cheeked 22-year-old with long blond hair and an angelic face that could be mistaken for the blandly handsome youngster on a can of Dutch Boy house paint. “I was a young-looking person,” he recalls. “I wasn’t a man yet.”

Those white-bread looks helped him get a part on Broadway as Rolf, the young Austrian telegram boy turned Nazi stool pigeon in “The Sound of Music.” But he knew that to become a real actor, he needed training. His girlfriend Lauri Peters, who became his first wife, helped steer him to the Neighborhood Playhouse School of the Theater, Sanford Meisner’s acting studio. Meisner was an unassuming but intensely focused teacher who preached emotional honesty and credibility to several generations of performers, including Gregory Peck, Grace Kelly, Joanne Woodward and Robert Duvall.

Meisner came to love Voight’s playfulness and his ability to turn his emotions on and off. “I can cry 17 different ways for 17 different reasons,” Voight would boast. Famed New York casting director Marion Dougherty caught him in several amateur productions and created an index card for him in her burgeoning talent file. Most notably, he appeared in a legendary production of Arthur Miller’s “A View from the Bridge” in 1965, at the Sheridan Square Playhouse in Greenwich Village, with Duvall and Susan Anspach, directed by Ulu Grosbard. Voight played Rodolpho, an undocumented immigrant from Italy with romantic aspirations and tragic nobility. “Maybe I was really scared, I don’t know,” Voight recalls, but “I was able to use that stuff that I had been learning with Sandy, plus new things from working with Bobby [Duvall] … I commanded it in a certain way and it became my first insight into my real talent.”

Dustin Hoffman was also involved in the production, as Grosbard’s assistant director, and he watched Jon Voight’s performance evolve over time. “Voight and I saw each other every single day on ‘A View from the Bridge,’ and he was brilliant in it,” Hoffman recalls.

“Midnight Cowboy” is the bleak tale of Joe Buck and Ratso Rizzo, a male hustler from Texas and a tubercular petty thief from the Bronx, who forge a fragile friendship from mutual desperation to survive on New York’s mean streets. When British film director John Schlesinger and producer Jerome Hellman hired Dougherty to help cast the movie, they had already chosen Hoffman, fresh off his breakthrough starring role in “The Graduate,” to play Rizzo, and had narrowed their search for Joe Buck to two promising young actors, Kiel Martin and Michael Sarrazin. But Dougherty insisted they consider Voight.

Schlesinger was dismissive. He didn’t find Voight’s smooth, kewpie-doll face terribly attractive or dramatically compelling. “He just didn’t seem to me to be the physical image of the cowboy,” Schlesinger would later explain. “I thought he was, I don’t know, too butch-looking, or baby-faced, or whatever.”

Still, despite his doubts, Schlesinger gave Voight a copy of the script and told him to come back the next morning to read with screenwriter Waldo Salt (Jennifer’s father). Voight showed up at the Astor Hotel, near Times Square, started talking about Joe’s character and never stopped. “This boy is lonely, that’s the essence of this film,” Voight recalls telling Salt. “He’s not conning anybody. He’s so vulnerable and he’s trying to pass himself off as a normal human being. And that’s a big effort for him, which means there’s a lot of comedy, but there’s also this part of him that should break your heart.”

Salt liked what he heard and Voight was invited back for a screen test along with front-runners Martin and Sarrazin, as well as Robert Forster, Don Stroud and Lee Majors. Each actor did an excerpt from a scene between Joe and Ratso, with Dustin Hoffman unselfishly volunteering to play Ratso for each candidate; then each was shot with a long lens while strolling down a busy New York street in Joe Buck’s cowboy outfit to see how the actor stood out in a crowd; and finally, each sat for an interview in front of a white screen, with Waldo Salt playing an aggressive off-screen questioner.

The only screen test that has survived is seven minutes and nine seconds of Voight under Salt’s mocking interrogation. Voight is wearing a lavender western shirt embroidered with floral designs, with pearl buttons, and a black kerchief around his neck. His accent sounds like it’s stuck in traffic somewhere between Yonkers and Amarillo — it’s clear he’s never heard a real Texan talk. He’s fielding a series of increasingly hostile and sarcastic questions:

Salt: “How long’s it been since you been on a horse, cowboy?”
Voight: “I told you before the show I ain’t never been on a horse.”
Salt: “Did you ever make it with men?”
Voight: “Well, you do what you can to get by. Right?”
Salt: “Boy, you’re just one hell of a man, aren’t you? What makes you think that you’ve got something you can sell to women?”
Voight: “‘Cause I know it … Got something in my pants, that’s all.”

It’s a lumpy, half-baked confection of a performance, mostly hostility with just a dash of vulnerability. What’s missing is the sense of innocence and the good-ol’-boy charm that Joe Buck could turn on and off.

The next day, Schlesinger and his team sat together and watched all the tapes. The first to be discarded was Kiel Martin, whose dark charisma seemed to have vanished once the camera was turned on (which was not the case a decade later in “Hill Street Blues,” the groundbreaking NBC cop show, on which an older, more weathered Martin played recovering alcoholic J. D. LaRue with the perfect mix of insouciance and vulnerability).

Schlesinger preferred Sarrazin to all the others, and the rest of the room quickly acquiesced. All except for Marion Dougherty, who kept fidgeting and shaking her head. Jerry Hellman asked what was wrong. “Nothing,” she replied. “You guys are making a terrible mistake, that’s all.” And she stormed out of the room.

No matter. Schlesinger had the only vote that counted. He phoned Sarrazin to tell him he’d gotten the part. He even invited Sarrazin back so that costume designer Ann Roth could take his measurements and start designing his outfits. Voight was devastated. “I knew I could do it,” he recalls. “I had passion. And I knew that with Dusty, we’d have something special. And I was afraid that if they didn’t cast it right, the movie would be a disaster.”

Each of the actors had agreed before the screen test that if they were cast they’d accept a bare-minimum fee of $17,500. But when Hellman got on the phone with a senior executive at Universal, which had Sarrazin under contract, the man insisted that Sarrazin get $50,000.

Never exactly a model of patience, Hellman grew more and more furious as the Universal man kept talking. He put his hand over the receiver, explained to Schlesinger what was happening, and said he wanted to hang up on the guy. “Do it!” the director replied. Hellman slammed down the phone.

The two men began reexamining the screen tests of Sarrazin and Voight. Each time they did, Sarrazin’s looked a little worse and Voight’s a little better. 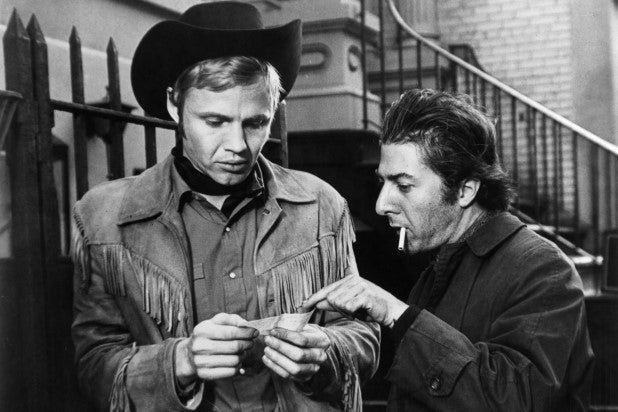 That clinched it for Schlesinger. He told Hellman to call Voight back and offer him the role. Later, when an interviewer asked John Schlesinger how he had discovered Jon Voight, he replied, “I didn’t. Marion Dougherty found him and insisted that I use him. Frankly, I didn’t even want Jon Voight.” But Voight and Hoffman together delivered one of the most powerful dual performances ever seen in movies. Both were nominated for Best Actor Oscars, losing out to John Wayne in “True Grit.”

As for Michael Sarrazin, he tore his phone off the wall when he heard he’d lost the part.

Adapted from “Shooting Midnight Cowboy: Art, Sex, Loneliness, Liberation and the Making of a Dark Classic,” to be published on March 16. 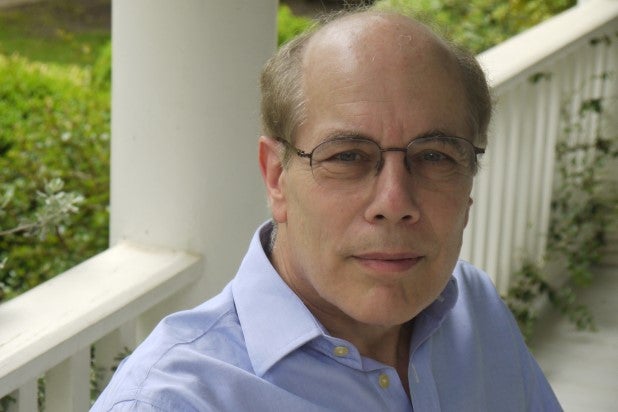