Thousands of people lined the streets for the annual gay pride parade in West Hollywood, Calif. on Sunday, just hours after 50 people were murdered in a mass shooting at an Orlando gay nightclub.

“When I first woke up, I was actually a little scared,” Kimberly Arellano, a cosmetologist from Los Angeles told TheWrap. “But then I thought, what better way then to honor [the victims in Orlando] than by being here?”

“It was pretty shocking,” her fiancée Tina Tharp, chimed in. “All this is happening too much. We have to unite and become strong,” she said.

The couple turned out despite reports that a heavily armed man from Indiana was arrested Sunday morning on his way to the West Hollywood Pride parade. The suspect — James Howell — had a car full of guns, ammunition and explosives.

But even that didn’t seem to scare Tharp, who said she felt safe despite the news reports.

“I’m a marine corps vet,” she told TheWrap. “I have all the belief that our police forces will do will do everything they can to protect us.”

The Orlando massacre marked the worst terrorist attack on American soil since the Sept. 11th attacks. The lone assailant, a 29-year-old American-born man named Omar Mateen, called 911 while carrying out the massacre, pledging his allegiance to ISIS, officials said. 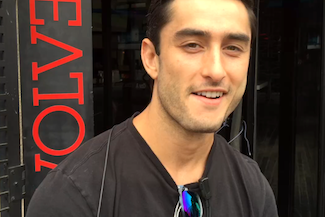 Bouncers guarding gay bars on Santa Monica Boulevard where the parade is being held said they are extra vigilant.

“We’re always evaluating everybody as they they come to the line,” 28-year-old Charles Carpenter, who works the door at Revolver, a popular gay bar, told TheWrap. “We just do the best we can so everyone can have a good time.”

The Los Angeles Country Fire Department was already gearing up for the more than 400,000 people expected to attend on Sunday, setting up three cameras equipped with infra-red capability mounted on large poles. The cameras, which can cost up to $200,000 each, can monitor areas a city block away, giving authorities a bird’s eye view of the parade.

One police officer guarding the area told TheWrap he was trying to keep an extra close eye on things without being too obvious, as to not scare parade-goers too much.

“We are a little more vigilant,” officer Bond Morrow told TheWrap. “We’re watching out for everybody here.”