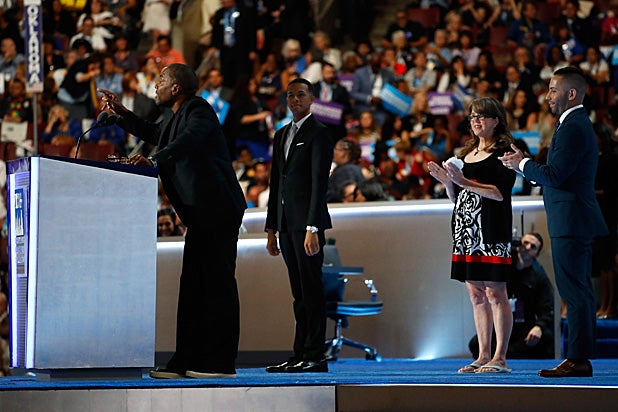 Director and “Empire” creator Lee Daniels pleaded for gun control at the Democratic National Convention on Wednesday, talking about how his police officer father was shot and killed in Philadelphia, the site of the convention.

“Hillary understands our right to bear guns, but wants to stop our guns from falling into the wrong hands,” he said, stating that guns kill 90 people a day in the United States.

“There’s only one candidate willing to take on the gun lobby and keep our families safe,” Daniels proclaimed.

Daniels talked loved ones under house arrest or in prison, and said he hoped young people knew they could bring change.

“And for that Millennial who comes from where I come from who thinks they don’t have a voice, you do. And there ain’t no choice. This is the most important election of our lifetime,” he stressed.

Daniels was one of many people who called from gun control Wednesday, including a mother of one of the victims of the Orlando shootings, and Connecticut Sen. Chris Murphy, who led the Democrats’ 15-hour filibuster calling for gun control after the attack.