Les McKeown, the Scottish lead singer of the ’70s pop rock band Bay City Rollers, has died. He was 65.

McKeown’s passing was announced through his Twitter page on Thursday, with his family Keiko and Jubei McKeown saying he died suddenly at his home on Tuesday, April 20.

“It is with profound sadness that we announce the death of our beloved husband and father Leslie Richard McKeown,” the message read. “We are currently making arrangements for his funeral and ask for privacy after the shock of our profound loss.” 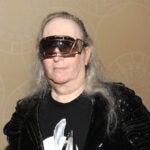 McKeown formed Bay City Rollers in 1973, and the band hit the pop charts the following year with its first single, “Remember (Sha-La-La-La),” which topped out at No. 6 on the UK charts. Bay City Rollers were known for their hooky, bubblegum pop tracks in the vein of bands like The Partridge Family, and their Scottish good looks didn’t hurt with teen girl fans, either.

The band’s best known songs included “Bye, Bye Baby” and “Give A Little Love,” which both hit No. 1 in the UK, and the group finally scored a major hit in the U.S. with “Saturday Night.” Between 1975 and 1978, they played sold-out gigs in the U.S., Japan, Britain, Europe, New Zealand and Australia.

McKeown left Bay City Rollers in 1978, which led the band to change its name to The Rollers and recruit a new singer, though they quickly fizzled out. McKeown returned for a series of reunion shows in 1982, then joined the band in recording an album, 1985’s “Breakout,” that marked their first studio LP in seven years.

McKeown continued performing with Bay City Rollers up until recently, and even had a series of tour dates lined up for this summer.