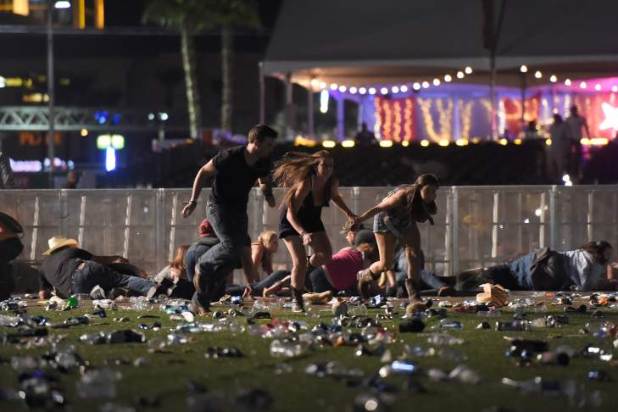 At least 59 people were killed and more than 500 injured when a shooter fired round after round from a high-rise room at Las Vegas’ Mandalay Bay Resort and Casino down onto a crowded country music concert.

The suspect, identified as a 64-year-old white man named Stephen Craig Paddock of Mesquite, Nevada, was found dead on the 32nd floor of the hotel with a cache of “in excess of 10 rifles,” Clark County Sheriff Joe Lombardo said.

“We believe the individual killed himself” just before authorities entered his room, Lombardo said.

At an earlier press conference, Lombardo said, “We believe it’s a sole actor, a lone-wolf-type actor.” He said investigators were executing a search warrant to enter his home roughly 80 miles outside of Las Vegas for more evidence, including a possible motive for the attack.

It was the deadliest mass shooting in modern U.S. history, surpassing the terror attack at the Pulse gay nightclub in Orlando, Florida, that killed 49 people and injured 58 others in June 2016.

The Vegas shooting occurred shortly after 10 p.m. PT Sunday during a Jason Aldean performance on the final night of the three-day Route 91 Harvest festival, held in a lot across Las Vegas Boulevard from the Mandalay Bay hotel.

Fans dove to the ground and took cover, trying to protect themselves as bullets flew through the air from the higher vantage point for what witnesses estimated to be 10 minutes.

Lombardo said authorities also located Marilou Danley, earlier described as a “companion” of Paddock but ruled her out as a person of interest in the case. “We have located  her out of the country,” he said early Monday. “He was utilizing some of her identification and we’ve had a conversation with her and we believe her — at this time — not to be involved.”

Briefing with @Sheriff_LVMPD regarding the Strip shooting. At least 20 dead, 100 injured. The shooter was local. pic.twitter.com/CzxRl9Oagw

At this time there is in excess of 50 deceased and over 200 injured individuals.

“Tonight has been beyond horrific,” Aldean wrote on Instagram. “I still don’t know what to say but wanted to let everyone know that Me and my Crew are safe. My Thoughts and prayers go out to everyone involved tonight. It hurts my heart that this would happen to anyone who was just coming out to enjoy what should have been a fun night. #heartbroken#stopthehate”

Tonight has been beyond horrific. I still dont know what to say but wanted to let everyone know that Me and my Crew are safe. My Thoughts and prayers go out to everyone involved tonight. It hurts my heart that this would happen to anyone who was just coming out to enjoy what should have been a fun night. #heartbroken #stopthehate

One person tweeted images of hundreds of concert goers lying down on the ground to avoid gunshots. (Warning: This and all future videos are disturbing.)

Another video recorded the sound of many rounds being fired.

Video courtesy of Drew Akioshi. He was attending the concert at mandalay bay when shooting started. pic.twitter.com/mbyh9Y387q

Some flights destined for @LASairport were diverted due to police incident. Please check with your air carrier if flying/picking up tonight.