Jane Fonda has offered detailed explanations and apologies for the actions that earned her the nickname “Hanoi Jane” during the Vietnam War. But as Megyn Kelly made clear Monday, many Americans aren’t ready to forgive and forget the events of more than 45 years ago.

On Monday, while addressing her much-criticized question to Fonda about plastic surgery, Kelly said Fonda is in no position to judge anyone because of her actions during Vietnam.

“Look at her treatment of our military during the Vietnam War, many of our veterans still call her ‘Hanoi Jane’ thanks to her radio broadcasts, which attempted to shame American troops,” Kelly told her NBC audience. “She posed on an anti-aircraft gun used to shoot down our American pilots.”

Kelly, a former Fox News host, said Fonda “called our P.O.W.s ‘hypocrites and liars’ and referred to their torture as ‘understandable,'” and said that she “had to apologize years later for that gun picture — but not for the rest of it.”

The “gun photo,” as Kelly described it, is a shot of Fonda posing in a helmet on a Vietnamese anti-aircraft gun. Here it is:

“There is one thing that happened while in North Vietnam that I will regret to my dying day — I allowed myself to be photographed on a Vietnamese anti-aircraft gun,” Fonda wrote on her website in 2011. “I want to, once again, explain how that came about. I have talked about this numerous times on national television and in my memoirs, ‘My Life So Far,’ but clearly, it needs to be repeated.”

She said on her site that many people visited North Vietnam during the war — “journalists, diplomats, peace activists, professors, religious leaders and Vietnam Veterans themselves” — in hopes of ending the war. (The North Vietnamese were communists, and the U.S. backed the South Vietnamese in hopes of stopping the spread of communism.) Fonda wrote:

It was not unusual for Americans who visited North Vietnam to be taken to see Vietnamese military installations and when they did, they were always required to wear a helmet like the kind I was told to wear during the numerous air raids I had experienced. When we arrived at the site of the anti-aircraft installation (somewhere on the outskirts of Hanoi), there was a group of about a dozen young soldiers in uniform who greeted me. There were also many photographers (and perhaps journalists) gathered about, many more than I had seen all in one place in Hanoi. This should have been a red flag.

She added that she and the North Vietnamese sang songs to each other in gestures of good faith — hers was written by South Vietnamese anti-war students, she said, and the one by the North Vietnamese soldiers included the lines, “All men are created equal; they are given certain rights; among these are life, Liberty and Happiness.” She said she was struck by the fact that the communist soldiers “celebrate the same words Americans do.”

She was exhausted, and emotional at this realization, she said. And then she made the gun-site mistake:

Everyone was laughing and clapping, including me, overcome on this, my last day, with all that I had experienced during my 2 week visit. What happened next was something I have turned over and over in my mind countless times. Here is my best, honest recollection of what happened: someone (I don’t remember who) led me towards the gun, and I sat down, still laughing, still applauding. It all had nothing to do with where I was sitting. I hardly even thought about where I was sitting. The cameras flashed. I got up, and as I started to walk back to the car with the translator, the implication of what had just happened hit me. “Oh my God. It’s going to look like I was trying to shoot down U.S. planes.” I pleaded with him, “You have to be sure those photographs are not published. Please, you can’t let them be published.” I was assured it would be taken care of. I didn’t know what else to do. (I didn’t know yet that among the photographers there were some Japanese.)

It is possible that it was a set up, that the Vietnamese had it all planned. I will never know. But if they did I can’t blame them. The buck stops here. If I was used, I allowed it to happen. It was my mistake and I have paid and continue to pay a heavy price for it.

Also Read: Megyn Kelly Fires Back at Jane Fonda: 'She Has No Business Lecturing Anyone' (Video)

The gun-site photo helped fuel other stories about Fonda, which she vigorously denies — including one that when she visited POW camps, she betrayed U.S. soldiers. She wrote on her site:

It is unconscionable that extremist groups circulate letters which accuse me of horrific things, saying that I am a traitor, that POWs in Hanoi were tied up and in chains and marched passed me while I spat at them and called them ‘baby killers. These letters also say that when the POWs were brought into the room for a meeting I had with them, we shook hands and they passed me tiny slips of paper on which they had written their social security numbers. Supposedly, this was so that I could bring back proof to the U.S. military that they were alive. The story goes on to say that I handed these slips of paper over to the North Vietnamese guards and, as a result, at least one of the men was tortured to death.

Fonda says that in fact, “according to even the most hardcore senior officers, torture stopped late in 1969, two and a half years before I got there. And, most importantly, I would never say such things to our servicemen, whom I respect, whether or not I agree with the mission they have been sent to perform, which is not of their choosing.”

Fonda referred to a 2001 letter that Capt. Mike McGrath (USN Retired), president of the POW-NAM organization, sent to then-Fox News columnist Roger Friedman saying the “strips of paper story is an Internet hoax.” He added:

It has been around since Nov 1999 or so. And, no, to the best of my knowledge, she never visited the Hanoi Hilton prison. The conditions sucked and there was too much risk that one of us old-timers might have seen her and yelled out the truth, insulted her, or if we got close enough [deleted]. The Vietnamese wined her and dined her and fed her propaganda to their liking. Remember, the V were fighting a propaganda war. They would never let her see the deplorable conditions we were in. They probably took a chance to even bring seven men into a well-lit studio room (you can bet it was cleaned and freshly painted, too). I think they just gave her a royal tour of the best the city had to offer … history, culture, clean rooms, clean hospital rooms, etc. and any bombed-out building they could claim had been churches, schools, etc.

Also Read: Common, Jane Fonda and the Scene at the Respect Rally in Sundance (Photos)

Kelly is right that the North Vietnamese played Fonda’s radio recordings as part of their propaganda war. You can read a transcript here. At one point she states:

One thing that I have learned beyond a shadow of a doubt since I’ve been in this country is that Nixon will never be able to break the spirit of these people; he’ll never be able to turn Vietnam, north and south, into a neo-colony of the United States by bombing, by invading, by attacking in any way. One has only to go into the countryside and listen to the peasants describe the lives they led before the revolution to understand why every bomb that is dropped only strengthens their determination to resist.

The North Vietnamese did win the war. Vietnam remains a communist country today.

Fonda said in her 2011 article that initially she “refused to believe we could be doing anything wrong” in Vietnam, and changed her mind only after she spoke with U.S. soldiers who had served there. That led her to educate herself about the war and turn against it. 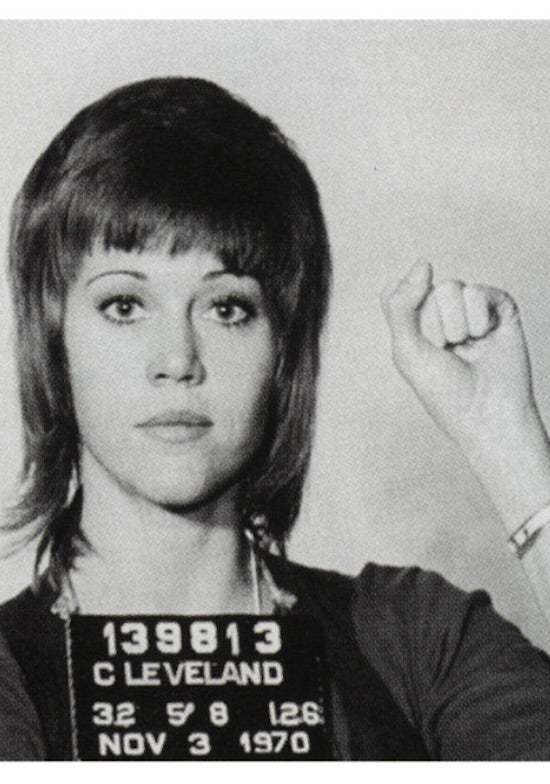 But it’s easy to understand why so many supporters of the war — or the troops — have taken issue with Fonda. Kelly is correct that Fonda was reported to have called returning servicemen who accused the North Vietnamese of torture of being “hypocrites and liars.” In 1973, she elaborated, while acknowledging that U.S. airmen had likely been tortured:

I think probably some of these professional pilots were probably beaten to death by the people whose homes and families they were bombing and napalming. But the pilots who are saying it was the policy of the Vietnamese and that it was systematic, I believe that that’s a lie. … These men were bombing and strafing and napalming the country. … If a prisoner tried to escape, it is quite understandable that he would probably be beaten and tortured.”

Fonda’s mug shot (above), by the way, was taken while she was in the U.S. giving speeches against the war. As Fonda tells it, she was arrested on baseless drug charges during a speaking tour because of pills that turned out to be vitamins.

Common, Jane Fonda and the Scene at the Respect Rally in Sundance (Photos)

Sundance 2018: Stars and activists gather for a protest in snowy Park City, Utah

If you couldn't make the Sundance Film Festival this year -- or were too tied up at one of the several Women's Marches popping up around the country -- we've got you covered. Check out the pictures from the "Respect Rally" in Park City, Utah, which included several actors and activists from Sundance.