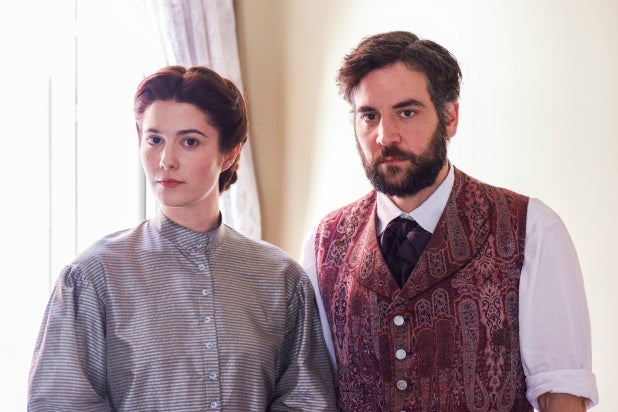 It’s rare that the Civil War is portrayed as a fortuitous time.

But that’s exactly how it is spun on the riveting new PBS drama “Mercy Street,” which weaves an edifying six-part tale about the opportunities this tumultuous period in American history created for white women and free black people.

When the Ridley Scott-executive produced series premieres Sunday Jan. 17, viewers will meet protagonist Mary Phinney (a captivating Mary Elizabeth Winstead, “Scott Pilgrim vs. the World”). She’s an abolitionist-leaning widowed countess who discards a life of pomp to work as a nurse at a Union-Army hospital in Alexandria, Virginia, in 1862. Articulate and moralistic, Mary is quickly thrown into a whirlwind of chaos where politics and philosophies come second to the gore, malnutrition and crude medical practices the war dictated.

Mary forms a mutually beneficial alliance with Samuel Diggs (McKinley Belcher), a northern black man born into freedom, who works as a hospital orderly. She is disregarded and disrespected because of her gender and he is belittled and brow-beaten because of his race but the professional courtesy and human kindness they extend to each other is refreshing and convincing.

In a different time and place, these two would be well-suited romantically. But in the Civil War-torn 1860s, they are simply allies in a battle for equality and the writers deftly but subtly make it clear that such pursuits were too life threatening to explore.

Instead, the romantic tension between Mary and Dr. Jedediah Foster (a cast against type Josh Radnor) slowly builds. Initially, the two are adversaries with her idealism put at odds with his racism and pragmatism. A man of his time, Dr. Foster’s Union allegiances are determined by his desires to keep the country whole and not the emancipation of enslaved black people.

Making matters more complicated, the good doctor is married and has a few demons and addictions. But the physical and intellectual chemistry between Jed and Mary is rife with potential.

The same can be said for the budding relationship between Samuel and Aurelia (a convincing Shalita Grant, “NCIS: New Orleans”). He suffers racism at every turn but has never been enslaved and she’s a tirelessly ambitious woman who escaped slavery but struggles to carve out a new identity.

Aurelia’s goals are further hampered when she relies on the help of Silas Bullen (Wade Williams, “The Dark Knight Rises”), a lecherous cad who doesn’t hesitate to exploit her vulnerability. While Bullen’s villainous ways and bigotry veer into trope territory, they also inspire several beautifully penned exchanges between Aurelia and a maid named Belinda (L. Scott Caldwell, “Lost”) about life as a black woman in that era and the meaning of freedom.

Fascinatingly enough, the exchanges between “Mercy Street’s” female characters are the show’s best as seen with Aurelia, Belinda, Mary and Anne Hastings (Tara Summers). When Anne, a more experienced nurse, challenges Mary’s expedited career ascension, Mary utters the series’ most compelling lines. “We are women in a men’s world. Let us not make enemies of each other.” Preach, Mary! Preach!

There is more to “Mercy Street” than its socially aware messages, thankfully, and veteran actors Peter Gerety (“The Good Wife”) and Suzanne Bertish (“Rome”) steal countless scenes with agile grace and humor. Meanwhile, Gary Cole delivers another superlative performance this time as businessman James Green as does Norbert Leo Butz (“Bloodline”), as a rather insecure Dr. Byron Hale.

Subplots surrounding Green’s southern belle daughters, espionage and PTSD do little to move the series along and would’ve been better shortened or left on the cutting-room floor. That said, such distractions do little to dilute “Mercy Street” as the imperative Civil War narrative it truly is. Hopefully timing and word of mouth will turn the series into a deserving contender in a Sunday television landscape packed with viable options.