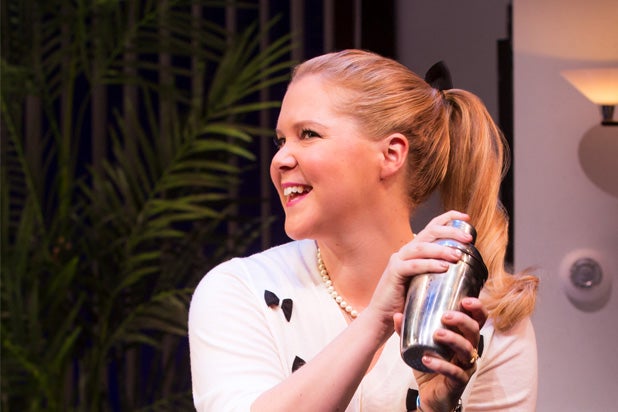 Sometimes it just feels so good to be mean, really mean. It’s also a lot more honest than talking through your feelings, which can be detrimental to a marriage.

Steve Martin has taken what might have made a good story for one of his New Yorker “Shouts & Murmurs” columns and turned it into a full-length play for Broadway — assuming you consider 80 minutes full-length. “Meteor Shower,” which opened Wednesday at the Booth Theatre, would be consistently hilarious if the comedy could be watched in the time it takes to read one of his New Yorker columns. The other 60 or so minutes of Martin’s new play is little more than set-up and filler, often repeated.

Much of “Meteor Shower” features a cast-against-type Amy Schumer, making her Broadway debut. She plays a wife, Corky, who works way too hard to stay married to her equally industrious and basically unhappy husband, Norm (Jeremy Shamos). They keep stepping on each other’s toes, then holding hands to apologize for what they’ve said. Marriage is hard. It can also be boring. Corky and Norm, those names pretty much sum up the characters.

Corky and Norm are visited one evening by another married couple, Gerald (Keegan-Michael Key, also making his Broadway debut) and Laura (Laura Benanti), who apparently go around town terrorizing their unsuspecting neighbors by being incredibly outrageous and mean, saying and doing anything to perk up life in mellow Ojai, California.

Schumer brings a perverse perkiness to her Ojai housewife. But Schumer reacting to insults is not nearly as much fun as watching her hurl them, which happens in the much more enjoyable final minutes of “Meteor Shower.”

How Corky and Norm transform themselves into a raucous and thoroughly nasty couple strains credulity, but then “Meteor Shower” is the kind of play that also features characters being hit by a deluge of meteors and talking about the attack as their entrails smoke and spurt bodily fluids. Set and costume designs are by Beowulf Boritt and Ann Roth, respectively.

Martin’s last effort on Broadway was “Bright Star,” a short-lived musical that recalled some of the more treacly movie melodramas of the late 1930s. With “Meteor Shower,” he has moved up to the early 1960s to fashion a comedy that lurches between the smarminess of “Under the Yum Yum Tree” and the facile outrageousness of “Oh Dad, Poor Dad, Mamma’s Hung You in the Closet and I’m Feelin’ So Sad.” At this rate, Martin should be borrowing from David Mamet or Tony Kushner for his next stage effort.

Whenever his talent for one-liners fails, Martin quickly has his characters bring up subjects like abnormally large penises, same-sex sex, severe parental neglect, and cannibalism. One of the “Meteor Shower” characters ate a girlfriend long ago. It’s a story told amid much shock on stage and in the audience, then promptly dropped.

Homosexuality, on the other hand, keeps popping up. It’s like blackface in a theater era gone by — something to throw at the audience whenever the white/straight characters can’t hold our attention. Shamos shoving his buttocks into Key’s lap tops the cannibalism story for grotesqueness.

Given these situations, Jerry Zaks has no choice but to direct his ensemble of four to deliver very broad performances, with Schumer being a tad less loud and forced than the others. I haven’t seen actors this over the top since the heyday of the Ridiculous Theatrical Company, a cross-dressing troupe that had the advantage of Charles Ludlam’s truly anarchic comedy.

Today, Zaks has the distinction of being at the helm of the two most over-amplified productions in town, “Hello, Dolly!” and “Meteor Shower,” a comedy housed in Broadway’s most intimate venue. Fitz Patton’s sound design gives a harsh metallic edge to every word spoken.