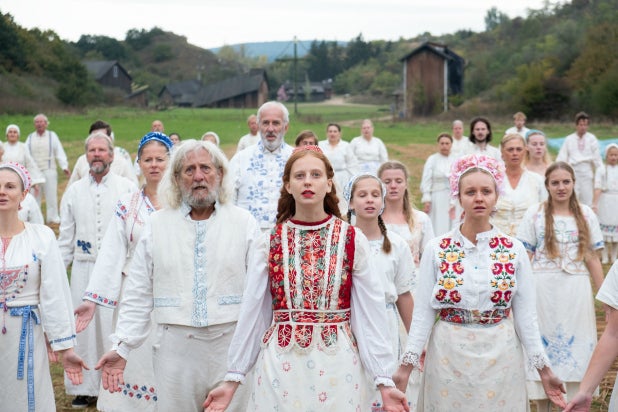 Try as it might to seduce you with its innocuous farm setting and Kumbaya vibes, writer-director Ari Aster’s “Midsommar” is just about the coldest — and most puzzling — film to be released so far this year. And that’s not because it centers on what turns out to be a cult community with frightening ulterior motives. It’s because none of its core characters, including the female protagonist (played by Florence Pugh, “Fighting With My Family”), make any rational decisions (while being too distant to care about anyway).

This isolation happens early in the film, as it drops audiences into a heightened narrative already in motion, leaving viewers rushing to catch up to what’s going on. Dani (Pugh) is at her wit’s end searching for her missing sister, who left her a cryptic note. She feverishly messages her sister, who may or may not have a history of emotional instability (it’s never really defined in the film), leaves her parents a rambling voicemail and —  in a last-ditch effort to find some sense of solace — contacts her boyfriend Christian (Jack Reynor, “Strange Angel”), who is too preoccupied with smoking a bong and shooting the breeze with his friends to pay attention to his girlfriend’s latest drama. (She apparently has a history of frantic calls.)

In one devastating moment, Dani is alone with her despair, and in the next, her worst fears are confirmed when her sister and parents are discovered murdered in their home.

It’s an utterly horrifying image that does at least manage to hook you as a viewer. You want to know what happened to her family and why, especially as you watch Dani collapse in misery. You may even expect Aster — who delivered one of the best recent narratives about grief and mental illness with last year’s “Hereditary” — to go down a similar path in this new film. But while his previous feature offered an unwavering look at the splintering of one family, “Midsommar” compartmentalizes Dani’s grief (and refuses even to bother explaining the murders) as it pivots away from it both tonally and narratively as it presents a broader harrowing picture.

That begins when Dani, who’s never seemed to notice the fragility of her relationship with Christian and is now too consumed with her own emotions to care, invites herself to his and his friend’s Sweden vacation after only learning about it at a party where they’re gushing about it. Maybe it’s from her own fear of abandonment, or perhaps her desperate attempt to sustain her relationship with a hilariously unbothered Christian, or maybe it’s because she wants a change of scenery, but Dani’s decision to go on this trip is as perplexing as literally everyone else’s in the film because it doesn’t even sound like a fun pick-me-up for anyone involved.

Based on the way Christian’s native-Swedish friend Pelle (Vilhelm Blomgren) describes their destination, it’s a desolate commune in the middle of nowhere that is all about freedom and community. And yet these vapid individuals — save for Dani and Pelle, of course — are strangely hyped to go. You know how there is always that moment in a horror film when you want to jump through the screen and stop the characters from making an obviously dumb decision that will undoubtedly end their life? This scene is that moment.

Though it is later (much later) explained that Christian and his friend Josh (William Jackson Harper, “The Good Place”) are there as part of their own academic research projects, there is absolutely no reason for Mark (Will Poulter, “Detroit”), the punchline of the group, to tag along, even though he thinks he’s going to get some excellent pot and have sex with as many women as he can. It’s like none of these characters has seen a horror movie before.

It’s not weird to them that Pelle, the only one with the advantage of being firmly rooted in both these American friendships and exactly what is happening on this commune, is curiously calm about everything, from taking his oblivious friends across the world to a setting that by definition doesn’t take kindly to visitors to staring emotionlessly at the sight of two of the cult’s elders jumping off a clip to their deaths. That graduation of events happens at such an unbearably sluggish pace that you almost delight in them despite how disturbing they are. Though troubled by these events, these Americans remain in this space, oddly intoxicated.

Perhaps it’s being in this idealized setting, made to look even more enchanting by cinematographer Pawel Pogorzelski (“Hereditary”), that has entranced these characters who are by some accounts soulless, in that they lack compassion for each other and the people around them. Dani particularly navigates the place in a somewhat lobotomized state, desperate to remove herself from the tragedy back home. So it could be argued that they make perfectly susceptible targets for the cult or any organized religion because they are not connected to a particular faith of their own. Even when Dani questions the mysterious disappearance of others on the farm, prompting her to want to pick up and leave, her fears are quickly suppressed by the mere sound of Pelle’s soothing voice. It takes little effort to get her to stay.

So what, then, is the real conflict here? Why should we care about anything that happens to Dani or her dim friends (who eventually meet catastrophic fates), especially when we see her blissfully succumb to her role in the cult? Despite the film’s overlong length (2 hours and 20 minutes), there’s not enough personal dialogue between the characters once they get to the farm (and we don’t spend enough time with them back in the U.S.) to access them as real human beings, aside from Dani’s grief and Christian and his friends’ obliviousness.

They’re reduced to props in a gloriously shot yet muddled film that begs for our empathy despite giving us no reason to have any.