Thankfully, Marvel Studios recruited two of the most exciting young filmmakers working today, Justin Benson and Aaron Moorhead, to help guide Steven Grant (or is it Marc Spector?), played by Oscar Isaac, through his supernatural odyssey. The duo have been making electrifying, mind-bending independent features like “The Endless” and “Synchronic,” and their jump to Marvel Studios has maintained everything that make their films so gripping: inventive camerawork, emphasis on character details and the sensation that, at any moment, the rug could be pulled out from under you in the most WTF-worthy way possible.

TheWrap got to speak to Benson and Moorhead about what it was like transitioning to the MCU, working with Isaac and Hawke, and how they kept track of Moon Knight’s multiple identities. 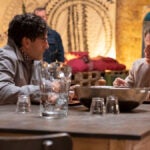 How did you get absorbed into the MCU?

Aaron Moorhead: Well, we had been trying to find a reason to work with Marvel for a long time. And luckily after a few false starts, we ended up getting the call for “Moon Knight,” which is funny because we could have easily, honestly, as tiny little independent filmmakers, just jumped at anything. You could have just jumped at the first thing that comes your way. Right?

Justin Benson: We would’ve done anything in the MCU.

Aaron Moorhead: But it happens to be this thing that’s a perfect fit. Right? It’s mind-bending and it’s dark and it’s strange and it’s edgy and there’s no other character exactly like him and he doesn’t have to fit into the Avengers. There’s no strings attached to the story or how it’s presented. It ended up just being a perfect fit. It was really cool.

Did you know the character before signing on?

Justin Benson: I’ll tell you something that probably no one’s going to believe.

Justin Benson: I had “Moon Knight” thrust upon me in the third grade, by a fellow student who was concerned that my comic book choices were profoundly uncool and too middle of the road. And he’s like, “Here’s what you got to try.” And Aaron’s heard this a million times, but it was like that scene in “High Fidelity” when the guy walks into the record store and he is talking to Barry, played by Jack Black and he’s like, “Hey, do you have Green Day?” And Jack Black’s like, “Oh no. No, let me give you something with a little more edge to it and that I find personally cooler.” But anyways, yeah. My journey with “Moon Knight” started decades ago. 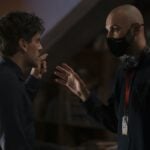 You brought up the fact that you are very independent filmmakers. What was it like having all of the resources working with Marvel Studios gets you?

Aaron Moorhead: Fortunately, we were surprised to find that there was very little learning curve. Because the process of filmmaking is the same, no matter how much your budget is, your own process. You do it and there’s kind of the same stuff, right? You have a shot list, you have a camera, you call action, you call cut, you work with the actors. And so all the same, if you took an MRI of our brains, making an indie film and making a Marvel film, they kind of all light up the same. Obviously, there’s a little bit more problem solving because money can’t solve anything in indie film, but it felt the same. Really, it was just the same questions: how do we make this effective? What is the character doing? That sort of things. Why is this shot completely out of focus? No, I’m just kidding.

This show plays with more outwardly horror imagery, particularly in the fourth episode. Was there some push and pull in terms of how much you could show and how much you had to pull back?

Justin Benson: Digging into 50 years of that comic book and reading as much of it as we possibly could and trying to internalize some of the best imagery from those books over the years, it was as though the character “Moon Knight” had become real and manifested through us to tell a story that like, if we weren’t bold, if we weren’t dark and edgy one moment and funny the next and giving a very human sense of levity, and if we weren’t hitting this very specific, bold tone that this “Moon Knight” that we’d manifested would be extremely angry with us.

Oscar Isaac is amazing, obviously. And I was wondering what it was like working with him and mapping out when one version of the character is talking over another.

Aaron Moorhead: The first day of the camera test, so before we he’d even really gotten to see exactly how Oscar was going to be presenting his characters, he shocked us by walking on as one character and then swapping and walking on as another.

And we were wondering the same thing you were, which is like, how do we have to map out… How’s the audience going to know who he is like what exactly is happening to him right there? What’s going to be the cue? Because it can’t be wardrobe or it can’t be this or whatever, because of any rules that we’d set up. And we realized on that day, “Oh, they’ll just know. They’ll know by looking at the way he holds his body. They’ll know the way he holds his face. It’s not even just the way he talks. It’s not even that.” We knew immediately, and we hadn’t even met these characters yet but they were very distinctly different. And a lot changed on that day, actually. We realized how little we had to do to give the audience the information they needed, of who exactly they were watching at that moment.

Mapping out reflections and that sort of a thing, that was a very lengthy, intricate shot-listing process. Actually figuring out where those things would be in each room and motivating it so it made sense, that was fun. 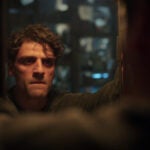 I was wondering too about Ethan Hawke, because he’s famously said that he didn’t want to be part of any kind of superhero thing and here he is and he’s so good and so weird. What it was like working with him and getting that character down?

Justin Benson: Good question. I personally wouldn’t be a filmmaker if the movie “Before Sunrise,” starring Ethan Hawke and directed by Richard Linklater, didn’t exist. Literally wouldn’t be a filmmaker. I saw that film and I thought, Oh, there’s something to this I think I connect with. I’d like to do this for a living.” Getting to even meet him was a profound experience. And then to meet him and work with him and then discover that he’s always open to these really beautiful, maybe even profound, philosophical conversations about his character and watching how even playing an antagonist, how he goes to such great links to find the humanity that everyone can understand in that character. If Ethan told you why this guy does what he does, you would, yourself, understand it on an emotional level. And to be able to work with him in that capacity was just a huge honor. Him and Oscar are not only two of our generation’s greatest actors, but two of our generation’s greatest collaborators.

New episodes of “Moon Knight” stream every Wednesday on Disney+.