Nancy Pelosi was as surprised as the rest of us when news broke Monday night of the FBI’s raid on Donald Trump’s Mar-a-Lago estate – but she was more than happy to share her initial thoughts on the matter while appearing on MSNBC’s “Morning Joe” Tuesday.

Sitting with co-hosts Joe Scarborough and Mika Brzezinski to discuss her much-scrutinized trip to Taiwan last week, Pelosi was first asked to share her thoughts on the historic raid. 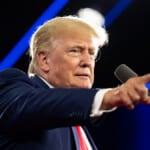 “We’ll get to the very important questions surrounding what’s happening in Taiwan in just a moment,” Brzezinski began. “But first – good morning – we would like very much to get your reaction, Madame Speaker, to the search of former president Trump’s estate in Mar-a-Lago down in Florida.”

“All I know about that is what is in the public domain,” the Speaker of the House began, smiling. “I was surprised that it flashed on my phone last evening, so I don’t really have too much to say except that to have a visit like that, you need a warrant; to have a warrant you need justification. And that says that no one is above the law, not even a president or a former president of the United States. But all of this should be made known to us over time. But I have no knowledge of it.”

Speculating on what’s become known of the raid overnight, specifically as it relates to Trump’s handling of presidential documents, Pelosi added: “I do know that there has been chatter, more than chatter, about the presidential, president’s documents and how they must be preserved for history. And we’ll see what the justification was for the raid. I just don’t know. I think everybody was surprised by it.”

Watch Pelosi’s full comments in the video above. 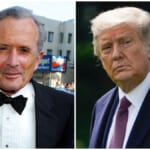