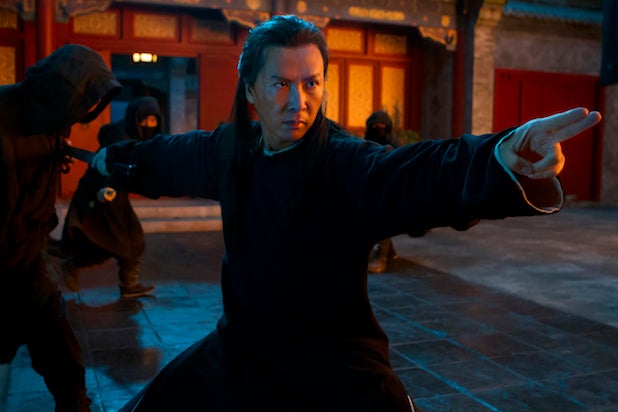 Netflix’s  “Crouching Tiger, Hidden Dragon: Sword of Destiny” managed to make it onto some AMC screens after all.

The theater chain previously vowed to boycott the streaming site’s theatrical release of the film, since it would be available to stream online the same day, but CEO Adam Aron said Monday that the company exhibited the film at about four to six of its 153 IMAX screens.

“We actually did wind up as a favor to IMAX showing ‘Crouching Tiger,'” Aron said on a call to discuss the chain’s fourth-quarter earnings.

Also Read: Why It Just Got Harder to Trick Netflix

He suggested the film drew a predominantly Chinese crowd of theater-goers, hinting that the early showings don’t augur it to become the same mainstream U.S. phenomenon that its predecessor was.  “The language of choice for those few screenings was Mandarin,” he said.

Netflix had intended “Crouching Tiger” to ratchet up its campaign against the so-called windowing system for releasing movies, but theater owners’ alliance against the film hobbled the plan. When Netflix announced its plan to release its sequel to 2000’s “Crouching Tiger, Hidden Dragon” on its on-demand-streaming site and at IMAX theaters at the same time, major theater chains Regal Cinemas, Cinemark and AMC said they would refuse to play it.

Earlier this month,  IMAX set “Sword of Destiny” to play in just about a dozen locations, significantly fewer than expected.

The Weinstein Company was Netflix’s partner in the release of the martial-arts epic, handling the IMAX bookings and its release in China with the China Film Group.