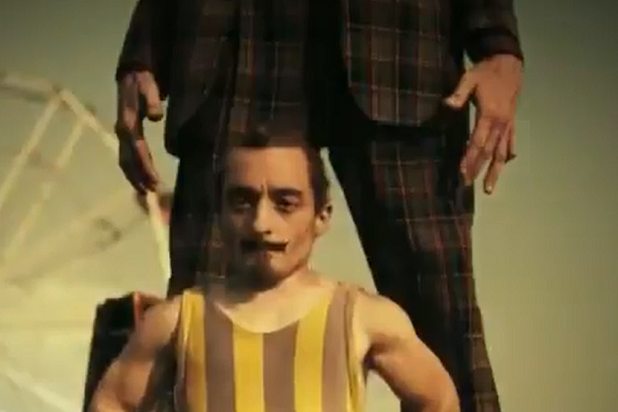 Prepare for a lesson in perspective, courtesy of “American Horror Story: Freak Show.”

Yet another teaser for FX’s creepy anthology series has hit the web, introducing what appear to be two more characters added to the already packed-to-bursting cast.

The brief clip depicts a man so tall that only a portion of him fits in the screen. As his towering presence fills the monitor, a wee little muscle man struts between the giant’s legs, standing defiantly in arms-akimbo stance, even though he’s not even sack-high to his scenemate. (Tiny people appear to be a theme this season; “American Horror Story: Freak Show” had previously enlisted the world’s smallest woman for the upcoming run.)

Set at a 1950s freak show in Florida, the latest iteration of the “American Horror Story” saga stars returning actors such as Jessica Lange, Sarah Paulson (who plays a two-headed woman), Kathy Bates (as the bearded lady) and Gabourey Sidibe, and brings aboard newcomers such as Michael Chiklis, Finn Wittrock and Patti LaBelle.

The show is set to return to the air Oct. 8.

Enjoy the sneak peek below.