We wrote about how Nicolas Cage’s “Pig” only looks like he’s about to turn into John Wick and go crazy on a bunch of bad guys, but his latest film “Prisoners of the Ghostland” actually goes there and then some.

“Prisoners of the Ghostland” is the next film from action auteur Sion Sono, and it casts Cage as a bank robber sprung from prison and tasked with rescuing a wealthy warlord’s missing adopted granddaughter. But to make sure he doesn’t run off and sticks to the job, Cage is strapped into a leather suit that will self destruct within five days, including with glowing, bombs latched around his neck and — ahem — his “trousers.”

The trailer for “Prisoners of the Ghostland” is as colorful and appropriately crazy as that premise sounds, with Cage bellowing “I am radioactive” and the trailer even proudly boasting that Cage says it is the “craziest” film he’s ever made. 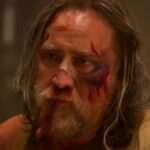 Also Read:
‘Pig’ Writer Explains Why Nicolas Cage Drama Is Nothing Like ‘John Wick With a Pig’

“Prisoners of the Ghostland” first made its premiere at Sundance, and it was acquired by RLJE Films, the team that also released some of Cage’s other recent gems such as “Color Out of Space” and “Mandy.”

The film co-stars Sofia Boutella as the captured granddaughter and Bill Moseley as the evil Governor of the treacherous frontier city of Samurai Town. It opens in theaters, on VOD and on digital on September 17.