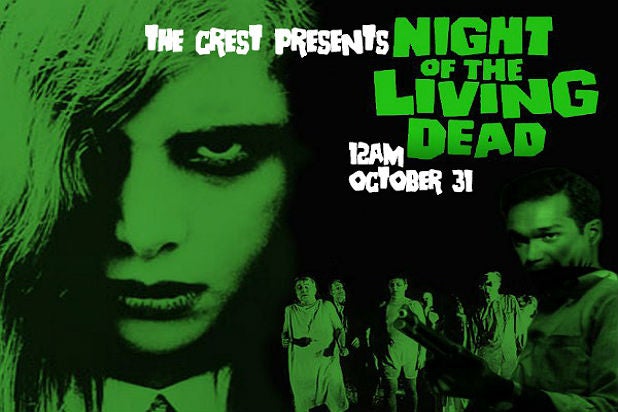 Just in time for Halloween, an homage to landmark horror filmmaking will be held this Friday night in Los Angeles.

The Crest of Westwood, a classic art deco movie palace on Westwood Boulevard, announced a special midnight screening of George A. Romero’s acclaimed “Night of the Living Dead.”

Will Greig, operations director at The Crest, said: “We planned an all-nighter Oct. 31 — starting at midnight — filled with horror films including ‘Child’s Play,’ ‘Killer Klowns From Outer Space,’ ‘Dawn of the Dead’ and ‘Blacula.’ It’s All Hallows’ Eve, let’s open it up with a marathon of thrillers, namely ‘Night of the Living Dead’ which starts right at midnight as an homage to landmark horror filmmaking.

“Its influence spans the genre and has influenced generations of filmmakers. The film itself has been selected by the Library of Congress for preservation in the National Film Registry as a film deemed culturally, historically or aesthetically significant,” Greig added.

The Crest will play host to the event. In 1940, The Crest was commissioned by Frances Seymour Fonda (mother of Peter and Jane Fonda). It houses a single-screen movie theater and an entertainment stage for live shows along with Dolby Digital sound. In 2008, the Los Angeles Cultural Heritage Commission voted unanimously to recommend the theater for designation as a City of Los Angeles Historic-Cultural Monument.