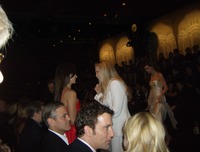 On the night before Oscar, Giorgio Armani must be adored. This is the only conclusion I can draw from the stunning assemblage of celebrity plumage that appeared at the home of local billionaire Ron Burkle for a cocktail party and fashion show on Saturday night. This is the first time I can recall seeing Armani at an Oscar weekend in a decade or so of my covering the event. Harvey Weinstein made sense; of course he’d be here. Al Gore? Burkle is a major Democratic donor, and Gore’s documentary is up for an Oscar. Steve Martin, John Travolta and Kelly Preston — they loitered around the swimming pool. That’s plenty of firepower right there. But by the time we all gathered in a massive, black tent and found seats — no, not behind the mansion, which we never entered, behind the pool, and the bar by the pool —  I had to rub my eyes. I could not recall seeing a line-up like this: Helen Mirren beside Clive Owen, beside George Clooney, beside Penelope Cruz, beside Leonardo DiCaprio beside Cate Blanchett. Across from them: Katie Holmes, Mark Wahlberg, Josh Hartnett, Natalie Portman, Adrian Brody.  Wait, we’re not done:  Martin Scorsese came. Clint Eastwood came. Clint Eastwood? To a fashion show?

Without publicists, agents or other protection, it was a rare moment of A-list intermingling. Clearly, Graydon Carter, the editor of Vanity Fair, is facing some competition. He has been the silver baron of the ironclad A-list party for some years: the post-Oscar paty at Morton’s. Someone, clearly, is creeping on his turf. Stay tuned.