After watching a screening of MacDonald’s performance, which was recorded in his home, friends of the late “Saturday Night Live” star, discussed his impact on the comedy world. During their conversation, several of them admitted they didn’t know the star, who died in September 2021 after a nine-year battle with cancer, was sick.

“I don’t know how everyone else felt here, but Norm was sick for quite a while, and he got sicker and I didn’t know and I talked to so many people who I was sure knew,” O’Brien said. “I thought, ‘Maybe I’m the only one that doesn’t know.’ … He didn’t want anybody to know and so, being the self-absorbed person I am, I think a lot of us, we thought, ‘Is he mad at me? Is there something I did?’ because we kept trying to get him to come back on and we couldn’t. He couldn’t do it because I don’t think he was up for it. He didn’t want to answer questions about maybe, you know, his appearance or anything, but I remembered when he went, everybody in the community was — we all thought we were the only one that didn’t know, and we were so upset that we didn’t get a chance to tell him what he meant to us.” 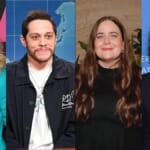 Chappelle also said he didn’t know that MacDonald was sick.

“The last time I saw him was at the Comedy Store, and he was uncharacteristically emotional. Like when we parted company, he was. And there’s a picture of me and him and the back of Chris Rock’s head — I put it in my special,” Chappelle said. “That picture — it’s in the end of ‘The Closer’ — was the last time that I saw him. He came up, he stood behind me, and I realized he was posing for the picture, in hindsight, like a gift. It was a very fitting goodbye.”

Shannon said MacDonald seemed to have an “urgency” to the words he shared with her when they crossed paths for the “Saturday Night Live” 40th anniversary show.

“I saw him at the ‘SNL’ 40th, and I didn’t know he had cancer or anything, but I remember as soon as he saw me, he was like, ‘I love you, Molly.’ Just he blurted it out right away,” she said. “I just had a sense of like, I could feel that he had this kind of urgency to say exactly what was on his mind in the moment. … And I just I was like, ‘Oh, something’s different with Norm.’”

Sandler and Spade discussed a stand-up tour they did with MacDonald and Rob Schneider, with Sandler noting their friend expressed his emotions during the jaunt.

“He did get emotional a lot though,” Sandler said. “Like on the whole tour, he would just all of a sudden get really teary eyed and stuff and he would be like, ‘This is wonderful,’” Sandler recalled. “Like just the tour itself and like hanging out and we’d have dinners and breakfasts and sh– and he was more — he’d just be so much fun to see. He had so much energy to hang.”