WARNING: MAJOR SPOILERS AHEAD FOR THE FIRST TWO EPISODES OF “OBI-WAN KENOBI”

There might be a new child in the hearts of “Star Wars” fans. With the arrival of “Obi-Wan Kenobi” on Disney+, fans have been introduced to a young Princess Leia — and of course, they promptly lost their minds.

“Obi-Wan Kenobi” picks up 10 years after the events of “Revenge of the Sith” and, given that Obi-Wan himself is watching over young Luke Skywalker on Tatooine, the appearance of his sister in the opening episode shocked many. Granted, it was more than a pleasant surprise — just like Baby Yoda’s surprise debut in the first episode of “The Mandalorian,” Young Leia appears to be a major character of “Obi-Wan Kenobi.”

Young Leia is bold and sassy and adventurous, just as Carrie Fisher played her in her adult years in the original tirlogy. For many fans, it’s virtually certain that Fisher would’ve approved of Vivien Lyra Blair, the young actress playing her character. Her only other major role is in the Netflix film “Bird Box,” but she shines brightly in “Obi-Wan.”

“I wish Carrie was alive to see the little girl playing her, she would be so delighted to see more story and depth added to Leia,” one person tweeted. Another guessed that Fisher “would be so proud” of the choices she made. 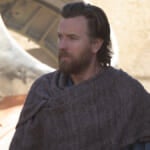 For others, seeing parallels not only between Fisher and Blair, but between young Leia and her mother Padme (Natalie Portman) brought just as much joy, particularly when Obi-Wan laid them out explicitly, describing Padme in the second episode of the series.

Some took to imagining what the Skywalker family would’ve looked like if Anakin had never turned. “Can already imagine what their conversations would’ve been like.. nobody speak to me,” one person tweeted, alongside photos of young Leia and “Revenge of the Sith” Anakin.

But for the most part, the takeaway was simply that Blair as Leia was the standout of the episodes. “
Grogu move over (temporarily) because it’s Baby Leia’s era now,” one person joked.

You can check out more delight over Leia’s returns below.