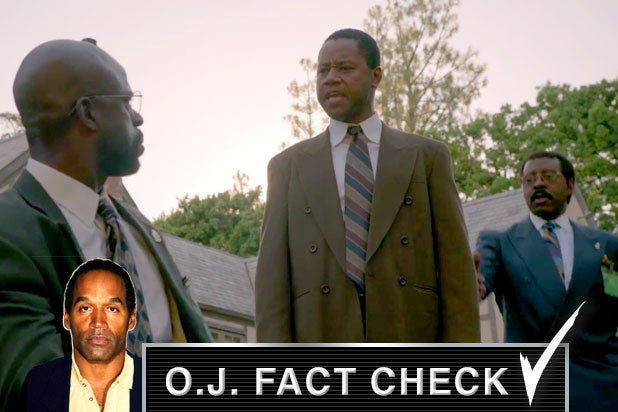 In the fifth episode of FX’s “The People vs. O.J. Simpson,” newly promoted prosecutor Chris Darden finds himself bewildered during a jury visit to Simpson’s house.

The defense has tried to manipulate the mostly African-American jurors by replacing a nude picture of O.J.’s white girlfriend with one of his mother, and photos of his white golfing buddies with African art. Even Simpson shakes his head at the deception: “These ain’t even my kids,” he says, looking at his pictures. “I don’t know who these people are.”

Darden walks off to collect himself, sitting down on a bench in Simpson’s garden. The Juice notices him, and snaps:

DID O.J. REALLY BLOW UP ON CHRIS DARDEN?

Yes he did — according to Chris Darden.

Like so many moments in the extremely well-written “The People v. OJ Simpson,” the scene accomplishes a lot at once. It shows Darden’s exhaustion — at the scrutiny he’s under and the machinations of Simpson’s Dream Team of defense lawyers. It sets up an important exchange between Darden and Cochran, the African-American lawyer Darden looks up to. And it shows a flash of Simpson’s temper, the one he hid from fans and jurors, but not from his wife.

According to Darden’s book “In Contempt,” Simpson was one of many people who made his life harder than it needed to be during the trial. He was working on the Trial of the Century, fielding racist phone calls and getting grief for helping the prosecution take down another prominent African-American. There’s a reason Episode 5 is called “The Race Card.”

Here’s how Darden recounted the incident in his book, excerpted by Newsweek:

When the jury was taken to see the O.J. house on Rockingham Avenue, I even had to take abuse from Simpson. His house had four television sets, a bar, and a game room. I watched my group of jurors closely. Were they getting it? Were they seeing how easy it would’ve been for Simpson to drop that glove on the walkway? Were they seeing how easy it would have been for the limousine driver, Allan Park, to see Simpson moving mysteriously outside his house?

All afternoon, he had been standing on the grounds, proudly pointing out features of his house to polite cops. I sat down on a bench just outside his front door, and Simpson pointed at me. “Get off my bench!” he began yelling. “I don’t want you on my bench or in my house!” I turned to Cochran, who stood nearby. “Johnnie, you better restrain your client before I have him muzzled.”

In the TV show, Darden actually says something less confrontational to Cochran: “You need to keep your defendant under control.” It’s the rare case where a TV show plays down the drama of real life.

“The People v. OJ Simpson” got it right.