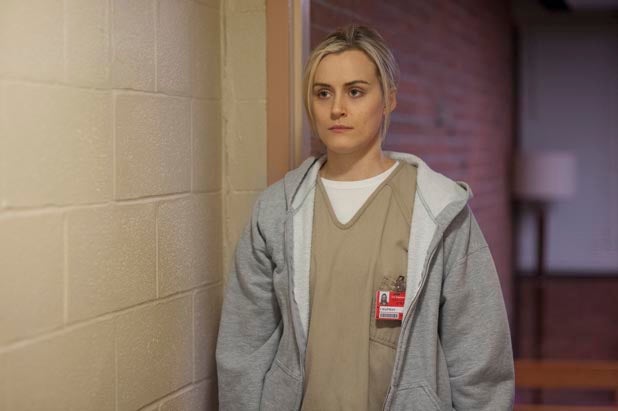 “Orange Is the New Black” may not be quite as binge worthy in its second season, but that’s because the storytelling has deepened.

Jenji Kohan’s prison dramedy was a revelation when it debuted on Netflix last summer. Some viewers — including this one — couldn’t get enough of it, devouring episodes in rapid succession. The diverse cast of female characters was unlike anything seen on network television; ditto the womanly plot lines with a sardonic twist.

This season we get to know the inmates better, and the show is even richer for it. You can still binge watch all 13 episodes when Netflix makes them available for streaming Friday, but the episodes deserve to be savored individually, much like later episodes of “Breaking Bad” and “Mad Men.”

When we last saw Taylor Schilling‘s Piper Chapman, she appeared to have broken bad a la Walter White herself. In the span of a season, her character had gone from annoying yuppie to violent inmate. Yet she’s a lot more likable — and confounding — now that she’s not as worried about bowing to social conventions anymore.

When the season opens, she’s in solitary confinement after having pummeled Pennsatucky (Tayrn Manning), a religious inmate who had been gunning for her. When the guards take her out of her cell, hints of the old entitled Piper surface: She starts quizzing them about where they’re taking her, and why.

Naturally she gets no answers. Once she arrives at her destination, Piper discovers prison can be nastier than previously experienced. (Three words: cigarette carrying cockroaches.) The fellow inmates seem even creepier.

By the end of the episode, Piper has been burned by her fatal attraction to Alex (Laura Prepon) again. She is plunged back into her old prison haunts with Red (Kate Mulgrew), Taystee (Danielle Brooks) and Crazy Eyes (Uzo Aduba). She’s no longer a fish out of water, but part of the prison system. And she’s deeply troubled by her capacity for murderous rage.

“I don’t know if that was always there,” Piper breaks down at one point, lamenting that “place that dark.”

The show flashes back to her past to suggest reasons why she might behave the way she does, and then does the same for other inmates.

Those segments are generally affecting, although after watching a series of episodes in a row — Netflix made six available for reviewing — they started to blend together. The backstory for romantic-to-a-fault Lorna (Yael Stone) was the most unexpected of the lot.

The new season introduces a key player in Vee (Lorraine Toussiant), a former inmate returning to do more time. She begins marshaling the black inmates while Gloria the cook does the same with the Latino inmates. Red, who was ostracized after her battle for control of the kitchen last season, is back to her scheming for power and contraband.

“Orange Is the New Black” is as scatological as ever in the second season and leans awfully heavily on lesbian sex to the point of repetition. But where it shines most is when it shows the sense of dislocation inmates can have from being shuffled around with little explanation. Prisoners come and go, and they all seem to have a story.

“This is like Dickens,” one prison guard (Lauren Lapkus’s Susan Fischer) says with wonderment after listening to the inmates’ drama.

The stories, and the characters, are indeed rich. Let’s hope they stay that way.