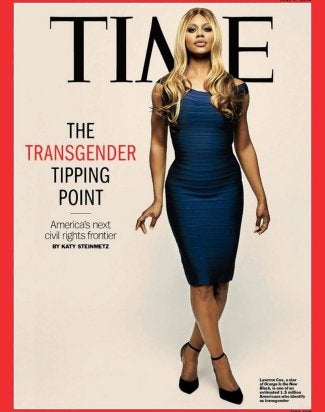 Thanks to her performance in Netflix’s “Orange Is the New Black,” Laverne Cox has quietly emerged as one of the nation’s most recognizable transgender people. As her star has risen, Cox has taken advantage of her ever-larger platform to speak out about transgender issues, and particularly the fear and harassment experienced by many transgender individuals.

Ironically, or perhaps not, Cox graces the cover of Time magazine exactly one month after she failed to make the Time 100 list. She stands as the face of their cover story, “The Transgender Tipping Point.” Cox credits her fans and supporters for her appearance on the cover. After failing to make the Time 100 list, the hashtag #WhereIsLaverneCox started trending nationwide.

#whereislavernecox on the cover of @TIME magazine. Thanks to everyone who used this # & spoke out.U made this happen. pic.twitter.com/CfSN2enfIs

Inside the magazine, Cox opened up about her own struggles growing up, while trying to figure herself out. It was a confusing time, filled with bullying and a lack of support or understanding from her mother and grandmother. This is a big part of why she speaks out now, to help other young people who are struggling with their own identities.

“There’s not just one trans story. There’s not just one trans experience,” she said in the interview. “And I think what [people] need to understand is that not everybody who is born feels that their gender identity is in alignment with what they’re assigned at birth, based on their genitalia. If someone needs to express their gender in a way that is different, that is okay, and they should not be denied healthcare. They should not be bullied. They don’t deserve to be victims of violence. … That’s what people need to understand, that it’s okay and that if you are uncomfortable with it, then you need to look at yourself.”