Though the diversity of this year’s Oscar nominee list didn’t reach last year’s record heights, the highlights include four Black actors being recognized along with LGBTQ and deaf actors, as well as female and Asian filmmakers in the Best Director race.

In the Best Actor race, Will Smith is considered a major contender to become only the fifth Black actor to win the award for his performance as Serena and Venus Williams’ father Richard in the inspirational sports film “King Richard.” If he wins, he would join a list that includes the late Sidney Poitier, Jamie Foxx, Forest Whitaker, and Denzel Washington, the latter of whom also earned his ninth acting Oscar nomination this year for “The Tragedy of Macbeth.”

The Best Supporting Actress race also sees Smith’s “King Richard” co-star Aunjanue Ellis among the list of contenders, along with Afrolatina star Ariana DeBose for her performance as Anita in Steven Spielberg’s “West Side Story.” DeBose is also an LGBTQ actress, making it the first time ever that more than one openly queer actor has been nominated in a single year as Kristen Stewart, who identifies as bisexual, was nominated for Best Actress for her performance in “Spencer.”

To date, only nine Black women have won acting Oscars, with the first being Hattie McDaniel in 1939 for “Gone With The Wind” and Regina King the most recent in 2018 for “If Beale Street Could Talk.” Eight of those winners were for supporting roles, with Halle Berry being the only Black woman to win for a leading role with “Monster’s Ball” in 2001.

The Best Supporting Actor race also saw Troy Kotsur become only the second deaf actor to be nominated for an Oscar. In “CODA,” Kotsur plays a deaf fisherman who rallies his hearing peers together to form a workers co-op while his hearing daughter who translates for him must decide between her family and her dreams of going to the Berklee College of Music. Kotsur’s co-star, Marlee Matlin, is the only other deaf Oscar nominee and winner in history, winning in 1986 for “Children of a Lesser God.” 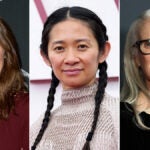 Also Read:
Every Female Director Nominated for an Oscar, From Lina Wertmuller to Jane Campion (Photos)

In the Best Director race, Jane Campion made history as the first woman to become a two-time nominee in the category, having previously been nominated in 1993 for “The Piano.” She is considered the top contender to win this year, which would make her the third woman to win Best Director alongside Kathryn Bigelow and last year’s winner, Chloe Zhao.

Also making history in the Best Director race is Ryusuke Hamaguchi, whose three-hour drama “Drive My Car” has floored critics around the world and has become the 14th non-English film in Oscar history to be nominated for Best Picture. Hamaguchi is just the third Japanese filmmaker and the first since 1985 to be nominated for Best Director, joining legendary directors Hiroshi Teshigahara for “Woman in the Dunes” and Akira Kurosawa for “Ran”