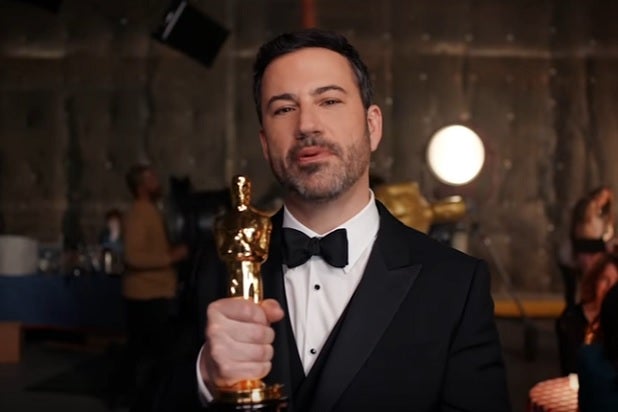 Oscars host Jimmy Kimmel went all in on the #MeToo movement in his opening monologue, saying that if Hollywood can stop harassing women, they “will only have to deal with harassment all the time in every other place they go.”

Kimmel also pointed to a massive Oscar statuette on the stage and said he was Hollywood’s perfect man.

“Keeps his hands where you can see them, never says a rude word, and, most importantly, no penis at all. He is literally a statue of limitations,” the host joked.

“Here’s how clueless Hollywood is about women: We made a movie called ‘What Women Want’ and it starred Mel Gibson,” Kimmel added.

He pointed to Best Picture nominee “The Shape of Water,” saying it represented “the year men screwed up so badly women starting dating fish.”

Kimmel also noted that the only person besides Harvey Weinstein to be kicked out of the Academy was someone who shared for-your-consideration screeners of films that circulate among Oscar voters.

He started by joking about last year’s epic mishap, in which “La La Land” was erroneously named Best Picture instead of the actual winner, “Moonlight.” He advised people named as winners: “Don’t get up right away.”

Hosting for the second consecutive year, Kimmel knew going into the ceremony that he would need to walk a careful balance between acknowledging the #MeToo and #TimesUp movements without letting them overshadow the show.

He also had his critics: The Atlantic ran a story heading into Oscar weekend noting the “thoroughly modern irony” that years ago, Kimmel hosted Comedy Central’s “The Man Show.”

“The host who will set the tone for the #MeToo Oscars got his start on a show that gleefully ogled women,” the story noted.

Sunday’s show began with a 1940s newsreel-style opening that included black-and-white footage of this year’s Oscars attendees, accompanied by an old-timer voiceover.