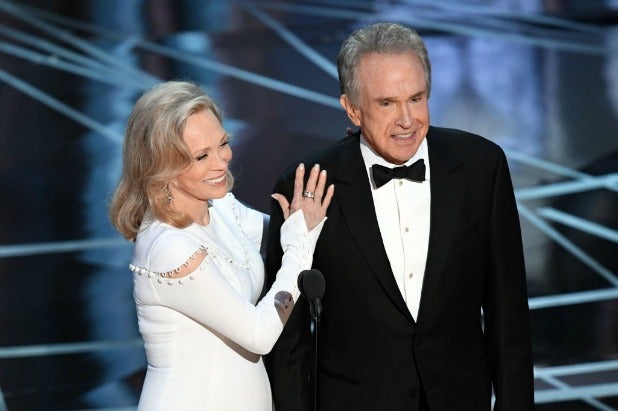 “Moonlight” beat “La La Land” for the Best Picture Oscar after Faye Dunaway mistakenly named “La La Land,” the heavy favorite, as the winner at the end of the ceremony on Sunday. It was an Oscar snafu — and upset — of historic proportions.

In an era of fake news, everyone involved struggled through the shock that indeed, somehow, the most important award in film had been given to the wrong movie.

Apologies abounded as the “La La Land” team graciously handed over the award to “Moonlight” after three of its producers had delivered acceptance speeches on the stage of the Dolby Theatre.

“This is not a joke. ‘Moonlight’ has won Best Picture,” said “La La Land” producer Jordan Horowitz, after the “La La Land” team had given acceptance speeches.

“This is very unfortunate what happened. Personally I blame Steve Harvey for this,” said host Jimmy Kimmel, with a very quick ad-lib about a past awards ceremony mess-up on Harvey’s part.

Warren Beatty, who had announced the award with Faye Dunaway, tried to explain what had gone wrong when they mistakenly read “La La Land” as the winner. It seemed that they had been handed an envelope containing the name of Best Actress winner Emma Stone for “La La Land.”

“I want to tell you what happened,” he said. “I opened the envelope and it said Emma Stone, ‘La La Land.’ That’s why I took such a long look at Faye and at you. I wasn’t trying to be funny.”

Kimmel jokingly blamed him for the mistake: “Warren, what did you DO?” he exclaimed.