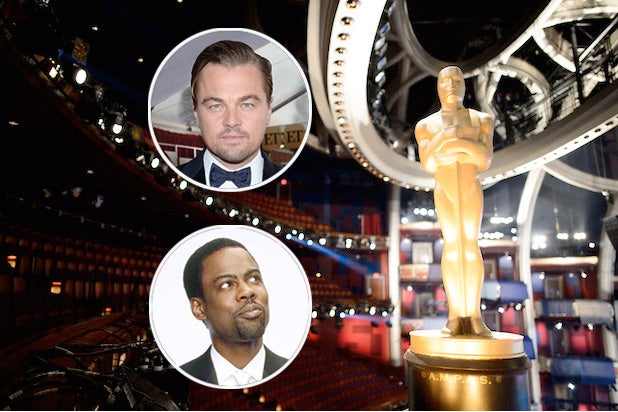 After months of campaigning and tens of millions of dollars in advertising, the 88th Academy Awards have finally arrived.

And that means that hundreds of millions of viewers around the world will finally learn the answers to two burning questions:

Is Leonardo DiCaprio finally going to win an Oscar?

And what’s Chris Rock going to say about all those white nominees?

Oh, sure, there are some other dramas that will play out on the stage of the Dolby Theatre on Sunday evening. For one thing, there’s the closest Best Picture race in more than a decade, with “The Revenant” and “The Big Short” battling down to the wire and “Spotlight” hanging on to a real chance for an upset.

There’s the possibility that Alejandro G. Inarritu could become the first director ever to win back-to-back Best Director and Best Picture awards, should “The Revenant” follow Inarritu’s “Birdman” into the winner’s circle.

And there’s the dramatic narrative of Sylvester Stallone, an Oscar darling 39 years ago for “Rocky,” an action star of no particular credibility for most of the time since then and now a comeback kid ready to grab his first Academy Award at the age of 69 for “Creed.”

(He may have written and starred in “Rocky,” which won Best Picture, but he wasn’t one of the producers, so he didn’t get a statuette.)

But let’s face it: Despite the tight races and the personal stories, this year is all about two “Di”s: DiCaprio and diversity.

The former was an Oscar cause célèbre way back in 1998, when “Titanic” won 11 Academy Awards, including Best Picture, but its leading man wasn’t even nominated.

That year, legions of mostly teenage girls raised a ruckus over the shocking omission of the then-23-year-old actor, who’d been nominated four years earlier for Best Supporting Actor for “What’s Eating Gilbert Grape” only to lose to Tommy Lee Jones for “The Fugitive.”

And then he got nominated for Best Actor for “The Aviator” in 2005, but lost to Jamie Foxx in “Ray” … and for “Blood Diamond” in ’07, losing to Forest Whitaker in “The Last King of Scotland” … and for “The Wolf of Wall Street” in ’14, losing to Matthew McConaughey in “Dallas Buyers Club.”

He’s the biggest male movie star in the world, unless you know somebody else who can turn a brutal, two-hour-and-36-minute wilderness survival story into a $400 million worldwide hit. But he can’t get any respect from the Academy — until, maybe, Sunday night, when his grunt- and gasp-filled performance as a guy who gets mauled by a bear is expected to finally win him the Oscar he’s shamefully had to do without for the first 25 years of his movie career.

Also Read: What's Up Next for This Year's Oscar Nominees (Photos)

(My faintly mocking tone aside, he’s great in “The Revenant,” and good for him if he wins.)

A DiCaprio win will be a big story on Sunday night. A DiCaprio loss would be an even bigger one, but let’s not even entertain that possibility. And despite the merits of their performances, wins for Brie Larson for “Room,” Alicia Vikander for “The Danish Girl” and even Stallone won’t mean as much to the mass viewing audience.

But to tell you the truth, none of it may mean as much to how the 88th Oscars show is viewed as the way the ceremony deals with the diversity problem.

Two consecutive years of all-white acting nominees exploded in the Academy’s face shortly after the nominations were announced in January, and #OscarsSoWhite instantly became the story of this year’s awards season. It led to calls for boycott, to a groundswell of outrage and then to dramatic action by the Academy, which quickly approved a number of major changes that could change the composition (and, crucially, the complexion) of the Academy in future years.

But that’s the future. Never mind what they’re going to do in June, when they invite new members and maybe take the vote away from some old ones. What about now? What are they going to do and say on the Oscar show itself, with (some of) the world watching?

We don’t yet know, but they’ll have the right person doing the talking. Chris Rock was either an inspired or very lucky choice to host the show by producers Reginald Hudlin and David Hill, who tapped the comic for his second Oscars before the furor began.

When he last hosted in 2005, race was a running theme in his monologue, and you know he won’t pussyfoot around the subject this year. Rock is extremely adept at finding very sharp and very funny things to say about race, and anybody who expects him to hold back at the Oscars doesn’t know how the guy works.

At the Nominees Luncheon earlier this month, Academy President Cheryl Boone Isaacs mentioned “the elephant in the room,” and succinctly added, “I have asked the elephant to leave.” That line was fine in a collegial, untelevised gathering of nominees who were there to celebrate, but it isn’t enough for Oscar night, when the elephant needs to be dragged onto the Dolby stage and addressed.

Rock will certainly address it. So, probably, will Boone Isaacs, herself an African-American. He’ll make jokes, she’ll make promises, and the key will be if the movie industry itself is paying attention — because that’s where the changes really need to be made, and where the Academy’s leadership role can have its most valuable impact.

And then they’ll get on with the business of handing out gold statuettes in 24 different categories — because even on a night that’s all about DiCaprio and diversity, the Academy still has a job to do.

Seventeen years ago, Streiber became the first photographer granted full access to the Academy’s show and rehearsals. These images are from “Oscar Revealed,” an exhibition that ran in 2016 at Smashbox Studios in Culver City