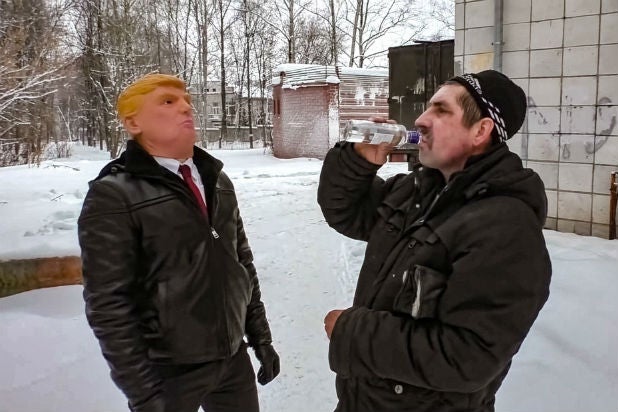 One day after Donald Trump handed out his Fake News Awards, the Sundance Film Festival kicked off with a film that genuinely sets a new standard for falsehoods — because director Maxim Pozdorovkin’s documentary is based on the Russian propaganda generated during the presidential election that put Trump in power.

The film was designed, said the director, to be constructed from “television news footage without a single true statement in it.”

“Our New President” screened on the opening night of the Sundance Film Festival, and you could argue that playing this kind of movie at an indie film festival is about as sure-fire as a rock singer yelling “Hello, Cleveland!” Even in a red state like Utah, festival goers will respond to anything that’s seen as anti-Trump as surely and uncritically as fans will cheer for the name of their city.

But “Our New President” is weirder and quirkier than that; it’s made to unsettle and provoke, not to take shots at Trump.

The film doesn’t try to answer the question of whether or how Russia influenced the election by misleading American voters — it’s more about how the state-sponsored media fed Russian citizens a nonstop narrative of how a downright evil Hillary Clinton, who by the way is also suffering from a variety of physical and mental disabilities, including “retardation,” was a threat to Russia and to the world.

And by the way, she was also cursed by a Russian mummy she visited as First Lady in 1997.

In this narrative, Trump was a hero mostly because he wasn’t Hillary, though the Russians engage in some bouts of Trumpian mythmaking on their own.

With its music cranked to melodramatic extremes and its chapters veering from one facet of the election to another, “Our New President” is freewheeling rather than cohesive, and it’s designed as a twisted but troubling showcase instead of an investigation. And Russian wackos making conspiratorial videos are a bit more entertaining than their American counterparts, perhaps, since they don’t hit quite so close to home.

But that’s another thing that keeps “Our New President” from having the impact it might: The Russian government is sponsoring disinformation and some of its citizens are buying into outlandish conspiracy theories, but is that really worse than some of the ranting we hear from Alex Jones or even Sean Hannity? As the current climate in Washington spirals into dangerous absurdity and a real Russian investigation moves forward methodically, it’s hard to feel enlightened or even terribly amused by the revelations here.

Still, Pozdorovkin isn’t really after revelations. “Our Next President” takes the funhouse-mirror environment of modern politics (where the funhouse is never any fun) and finds a new way to illustrate and explore it. There are worse ways to kick off a festival that will no doubt take lots more shots at our year-old president over the next 10 days.