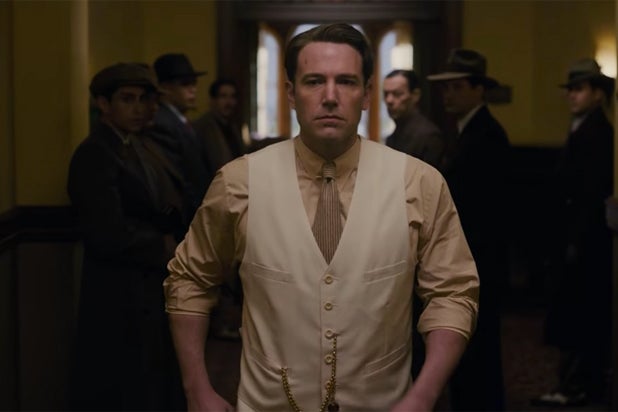 On Thursday night at the Directors Guild, Ben Affleck introduced a press screening of his new film, “Live by Night,” by saying that he wanted to make the kind of movie that could have been a blockbuster in a previous decade like the ’70s, “when a big, crowd-pleasing movie had scope and scale and lots of extras.”

He paused, and added, “Now, you have to wear a cape to have a blockbuster. Not that I have anything against wearing a cape. I love my cape.”

Make no mistake: “Live by Night” may be the new movie from the guy who starred as Batman in “Batman v Superman” and will direct an upcoming Batman film, but it is definitely not a Caped Crusader movie. Reviews are embargoed until December, but it’s safe to say that Affleck was right when he described the movie as a throwback to old gangster movies, albeit one that tries to both feel classic and appeal to current moviegoers.

Also Read: Ben Affleck Gets in a Shootout With Cops in First 'Live by Night' Trailer (Video)

“This was not a movie where I was like, ‘C’mon, we’re gonna win Best Picture,'” he said in a Broadcast Film Critics Association Q&A that followed the screening. “This was a more crowd-pleasing movie … that could have been made in the ’70s, or even the ’40s.”

“Live by Night” is based on the novel by Dennis Lehane, who also wrote “Gone Baby Gone,” which Affleck turned into a film in 2007. It’s the story of Joe Coughlin, an Irish kid from Boston who comes back from World War I battered and determined to make it any way he can, which means becoming a petty criminal and then a full-fledged mobster.

The film takes place partly in Boston but mostly in Tampa, Florida, where Joe runs a lucrative Prohibition-era rum-running operation that runs afoul of conservative Christians and members of the Ku Klux Klan. At one point, Joe confronts a Klan leader by talking about how the land was built on the backs of blacks and immigrants — a speech, Affleck conceded in the Q&A, that cuts very close to home these days.

“I thought it could feel distant,” Affleck said of that scene. “Now, it feels so current that I wish I could dial it back.”

Apart from those uncomfortably timely moments, the film is a fast-paced showcase for production designer Jess Gonchor, costume designer Jacqueline West, cinematographer Robert Richardson and editor William Goldenberg, all of whom could get awards attention.

As for writer-director-star Affleck, who was praised effusively by Goldenberg and co-stars Chris Messina and Sienna Miller in the Q&A, he could well be right to think this is more a commercial play than a big awards movie (though his last film, “Argo,” showed it’s entirely possible to be both).

The inspiration, he said, came when he became enamored of ’30s gangster movies while making his way through the book “1001 Movies You Should See Before You Die” — but he also tried to be aware of the current cinematic vocabulary, knowing modern audiences wouldn’t accept the style and pace of those old films.

Also Read: 18 Things You Didn't Know About 'The Departed' for Its 10th Anniversary (Photos)

The “Live by Night” cast also includes Elle Fanning, Zoe Saldana, Brendan Gleeson and Chris Cooper — but Messina stands out as Joe’s right-hand man, partly because he gained 40 pounds for the role.

He did so, he said in the Q&A, on a diet heavy on bagels and beer. “At work, on the set, I felt proud,” Messina said of the weight gain. “Dropping my kids off at school, I felt disgusting.”