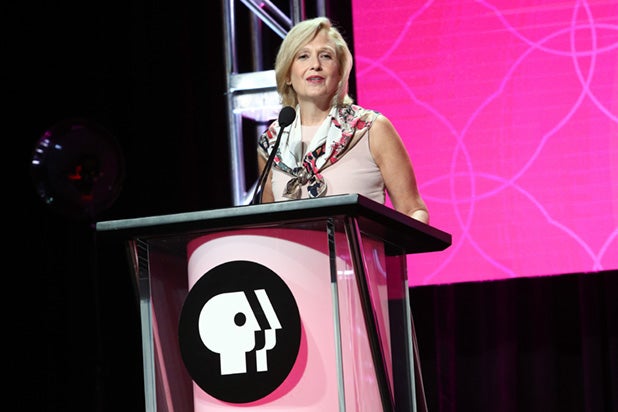 PBS CEO Paula Kerger has re-upped her contract for another five years, the executive announced on stage at the Television Critics Association press tour on Monday.

“I believe so strongly in the purpose and power of public television,” Kerger said. “The content that makes a difference in people’s lives, the conversations that bring people together, the programs and resources that prepare our youngest learners for success. Public television isn’t just relevant for this modern age, I believe that our work has never been more important, and I’m excited about what lies ahead.”

Kerger has held the position since 2006, and the new deal extends her run as the longest-serving president and CEO in PBS history.

“I always wanted to be sure that I’m adding value to the organization,” Kerger said, recalling the thought process behind deciding to commit to another five years at PBS. “I reflected on what we’ve accomplished thus far and what I think is really important in the future. I want to make sure that when I do finally hang up those skates, that I’ve done everything that I can to give public television the most sound a foundation as possible.”

Kerger has overseen the public broadcaster as it launched series and specials including “Downton Abbey,” Ken Burns’s and Lynn Novick’s critically acclaimed “The Vietnam War” docuseries and the Broadway documentary “Hamilton’s America.” Under her leadership, PBS has moved from the 14th most-watched network in the country to number six in the past decade.

PBS announced on Monday that it closed a carriage deal with YouTube TV, granting customers the ability to livestream 330 PBS member stations. The deal marked the first digital partnership of its kind for PBS, making YouTube TV the only streaming service to carry the network’s channels.

“I believe this is the most exciting time to be in media,” she said. “I feel like we’re at a time of great experimentation. I feel that in terms of the platforms, the formats, this is definitely not the time for the faint of heart.”