Not unlike Argo last year, “Prisoners” is a contemporary version of the kinds of movies made a few decades ago – this time serial-killer movies rather than political thrillers, and from the ’90s rather than the ’70s. Directed with sober, solemn earnestness by Denis Villeneuve (“Incendies”), it examines the emotional fallout of a child kidnapping on two families, even as it chronicles the psychological unraveling of the investigating detective.

Grim where its predecessors were spooky and barren where they were theatrical, “Prisoners” is a movie whose execution and performances are admirable, but its eventual concession to monologuing villains and life-or-death standoffs undermines the honest and substantive character work that precedes it.

Hugh Jackman plays Keller Dover, a God-fearing blue-collar contractor whose family dinner with neighbors Franklin (Terrence Howard) and Nancy Birch (Viola Davis) is interrupted when they discover that both of their youngest daughters have disappeared. Detective Loki (Jake Gyllenhaal) promptly apprehends Alex Jones (Paul Dano), the driver of a dingy camper that was spotted in the area, but he is forced to release the suspect when no evidence turns up. 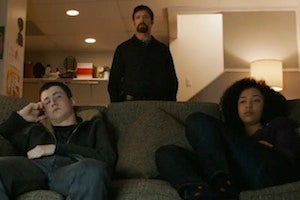 Nevertheless determined that the young man has the children tied up somewhere, Dover kidnaps Jones and tries to torture him into confessing their whereabouts. But after Loki’s investigation turns up another suspect, Dover begins to question himself, trying to figure out not just if he went too far in the name of rescuing his daughter, but sealed her fate by pursuing the wrong man.

At two and a half hours, no moment is spared in Villeneuve’s chronicle of either the families’ pain or Loki’s painstaking efforts – and that’s mostly a good thing. Details about a dilapidated property Dover owns are revealed in naturalistic, memorable but unobtrusive bursts of dialogue, and the filmmaker never tips his hat too far when Loki notices clues that become relevant much, much later.

It’s in this subdued and realistic portrait of events that Villeneuve succeeds most consistently, because he gives us a sense not only of the chronology of events, but convincing feelings of culpability, hostility, fear, and resignation. Moreover, even when Dover decides to take the law into his own hands, there’s a genuine reluctance, an anguish that pervades even his cruelest explosions of violence.

At the same time, the film seems unable to reconcile its moral ambiguity and thoughtfulness with the rhythms of a more traditional cat-and-mouse thriller. Not that it’s possible any longer to create a truly evil kidnapper/killer/villain whose motives are equal to the mystery and sophistication of their crimes, but Villeneuve supplies the audience with whale-sized red herrings en route to his final revelations.

Although the film is smart enough to tie almost all of its suspects, digressions and distractions together by the end of the film, even cursory reflection upon what convergence of circumstances led to its conclusion becomes a dizzying array of singular character choices, working in concert with one another in only the most improbable ways.

Nevertheless two thirds of a remarkable portrait of causality – evaluating the choices we make, and how they affect the world around us – Prisoners is precisely the solid sort of adult fare that signals the arrival of awards season. Though it’s likely too grim to follow further in the footsteps of four-square a winner like Argo, the two share in common a sort of self-seriousness that tries to deceive the audience into believing it’s watching something deeply complex, when it’s really just well-acted and ultimately very conventional crowd-pleaser.