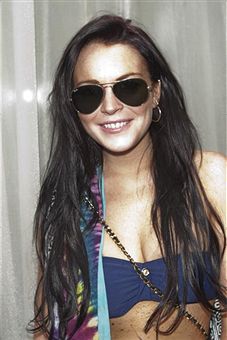 (Update: 5/6 5 p.m. PST: Bill Pullman’s manager has told TheWrap that the actor is not attached to play Hugh Hefner and producer Wali Razaqi’s claim to the contrary is false.)

The L.A. Times claims that "Inferno" producer Wali Razaqi confirmed that Lohan will star in the film, yet the story only offers a cryptic quote from Razaqi.

"We’ve all thought that Lindsay would be a great choice for a while now, and we’re all convinced that she is going to do it," Razaqi said.

Convinced that she is going to do it? Is she going to, or not?

"For at least a year, the director [Matthew Wilder] and I have gone back and forth imagining how awesome of a performance she could give if she was in the movie," said Razaqi.

She could give an awesome performance if she was in the movie? Could Razaqi be any more vague?

Rumors have been swirling about Lohan as Lovelace since Monday, when Lohan’s alleged photographer pal Tyler Shields told E! Online that Lohan had landed the gig, and that director Matthew Wilder had contacted him about doing promos for the movie.

TheWrap has been unable to confirm Lohan’s casting with her manager at Untitled Entertainment, and the actress is currently taking a break from her publicist Leslie Sloane Zelnik at BWR. Her agency, CAA, says an announcement will be forthcoming. It seems the only way to find out whether Lohan is actually doing the movie is to ask her directly on Twitter (@lindsaylohan).

The news is out there but no one on Team Lohan wants to respond to it, preferring to allow some foreign investors to make the official announcement at the upcoming Cannes Film Festival where Lohan might even make an appearance, though like the L.A. Times, I’ll believe that when I see it. Razaqi also says Lohan’s recent behavior isn’t a "serious concern," but I wonder what constitutes a serious concern in Razaqi’s world.

The producer also revealed that Bill Pullman is attached to play Hugh Hefner in the movie, which will be based on the real events of Lovelace’s life. Pullman’s actually a fairly inspired choice to play the Playboy publisher.