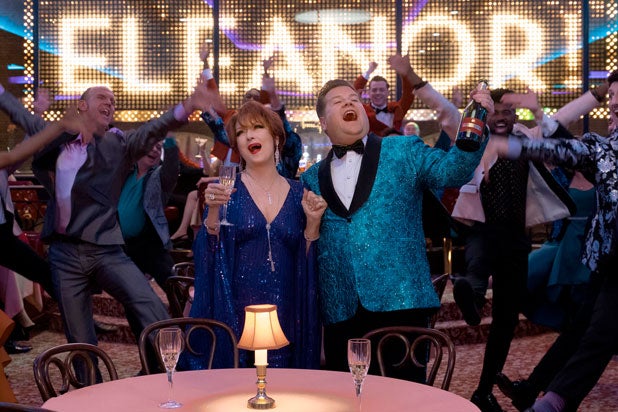 Ryan Murphy returns to his roots with his new big-screen feature, “The Prom.” The adaptation of a Tony-nominated Broadway musical that opened two years ago combines many of the director-producer’s passions: musical theater, high school, the small-town Midwest and A-list stars acting fabulous.

As with many a Murphy production, the fabulous focus features a bright jelly-bean palette that extends to the costumes and even the lighting of the many high-energy musical numbers (it’s a wonder you can make out the famous faces and Casey Nicholaw’s choreography through all the teal and purple filters).

The star power comes primarily from a quartet of Hollywood stars playing Broadway veterans who are down on their luck. Dee Dee and Barry (Meryl Streep and James Corden) have just starred in a musical flop about Eleanor and Franklin Roosevelt that closed on opening night (“Was it the hip-hop?” he wonders). They’re joined at their opening/closing night pity party by Angie (Nicole Kidman), a “Chicago” chorus girl who’s waited 20 years to take center stage as Roxie Hart, and Trent (Andrew Rannells), a Juilliard-trained actor-waiter who yearns for credibility.

Also Read: 17 Top-Grossing Broadway Musicals of All Time, From 'Hamilton' to 'The Lion King' (Photos)

Together, they decide to rehabilitate their images as self-absorbed narcissists by taking on a cause — or as Dee Dee puts it, “some little injustice we can drive to”: a teenage lesbian named Emma (Jo Ellen Pellman) who’s been barred from the prom at her Indiana high school thanks to the rantings of a bigot who leads the local PTA (played by Kerry Washington, in a thankless, one-note role).

The community is predictably unwelcoming to a quartet of “liberals from Broadway” — and they don’t exactly ingratiate themselves to the hometown Hoosiers by calling them “fist-pumping, Bible-thumping, Spam-eating, cousin-humping, cow-tipping … losers and their inbred wives.”

Needless to say, this high school is every bit as peculiar as the one Murphy depicted in his long-running Fox show “Glee.” Yes, it’s filled with varsity-jacket-wearing homophobes who bully Emma and keep her button-cute girlfriend (Ariana DeBose) closeted. But these same jocks and cheerleaders also issue prom-posals in full-on production numbers complete with synchronized dancing, backflips and belting. (Are we sure this school doesn’t have a drama department?)

And it’s led by a progressive-minded principal (Keegan-Michael Key) who backs Emma’s rights to attend prom. He’s not only a huge fan of Broadway musicals and Dee Dee’s career, but also… straight. (Cue an unlikely budding romance over drinks at Applebee’s — one of the film’s many locations that open up the story so it never seems stage-bound.)

“The Prom” is sharpest when it satirizes the pomposity of its stars, who tote their Tony Awards (and Drama Desk Awards) in their bags in hopes of snagging better hotel rooms. But Bob Martin and Chad Beguelin’s script goes as soft as cafeteria Jell-O when it comes to the Indiana crowd. Poor Emma shows more spunk than personality (though Pellman has a lovely singing voice) and her classmates and neighbors are little more than cartoon villains who transform all-too-quickly into future PFLAG marchers at the next Pride parade.

Still, there’s a generosity of spirit at work here, aided by Matthew Sklar’s winsome if old-fashioned score (with lyrics by Beguelin). The show is a true ensemble piece, offering each of the four top-billed stars at least one big musical number in which to shine. The women especially stand out: Streep shows some real belting skills in her big routine, while Kidman, with her “crazy antelope legs,” delivers a sultry Bob Fosse-inspired showstopper called “Zazz.”

Murphy keeps the story electric-sliding along so that we don’t have time to linger on some of its shortcomings. His real achievement is making “The Prom” feel like a film rather than a captured-on-camera stage production, one that still retains the let’s-put-on-a-show energy of live theater.

“The Prom” opens in select theaters on Friday and makes its streaming debut on Netflix Dec. 11.